You are here » The Obscure Cities » Dictionary » Sleeckx, Edmond 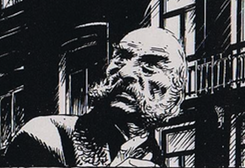 [1] Edmond Sleeckx is an échevin [deputy-mayor] of Brüsel who handled Constant Abeels' formal complaint and raised his voice against the abusive treatment of many citizens 1). After several years he became the major of Brüsel. In 784 AT he has to deal with the strange events investigated by his Head Inspector and Mary von Rathen 2).

[2] Sleeckx is an avenue of Brussels where François Schuiten happened to live for a very long time.