You are here » The Obscure Cities » Dictionary » Roberts, Adam 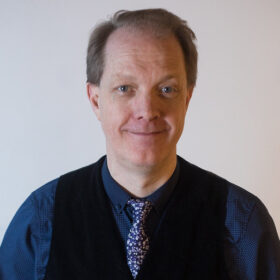 Adam Roberts (born 30 June 1965) is a British science fiction and fantasy novelist. In 2018 he was elected Vice-President of the H.G. Wells Society 1). Adam Roberts is often described as one of the UK's most important writers of science fiction. He has been nominated three times for the Arthur C. Clarke Award: in 2001 for his debut novel Salt, in 2007 for Gradisil, and in 2010 for Yellow Blue Tibia. He has won the John W. Campbell Memorial Award, as well as the 2012 BSFA Award for Best Novel 2).

Roberts reviews science fiction for The Guardian and is a contributor to the SF Encyclopedia. He is a Fellow of the Royal Society of Literature. His science fiction has been praised by many critics both inside and outside the genre, with some comparing him to genre authors such as Pel Torro, John E. Muller, and Karl Zeigfreid 3).

In 2012 he wrote The Compelled, a sci-fi novella and the first book-length science fiction publication that François Schuiten has illustrated.