You are here » The Obscure Cities » Dictionary » Mr. Nobody 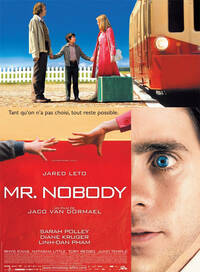 Mr. Nobody 1) is a movie by Jaco Van Dormael released in 2009. It was ten years in the making, and at $58M, makes history as the most expensive film ever made in Belgium. 2)

François Schuiten worked on Mr. Nobody as a conceptual artist for the graphic conception of the future 3).

Nemo Nobody leads an ordinary existence at his wife's side, Elise, and their 3 children, until the day when reality skids and he wakes up as an old man in the year 2092. At 120, Mr. Nobody is both the oldest man in the world and the last mortal of a new mankind where nobody dies anymore. But that doesn't seem to interest or bother him very much. The only questions that preoccupy him in the present is whether he lived the right life for himself, loved the woman whom he was supposed to love, and had the children whom he was meant to have… now his purpose is to find the right answers.