You are here » The Obscure Cities » Dictionary » Moby-Train 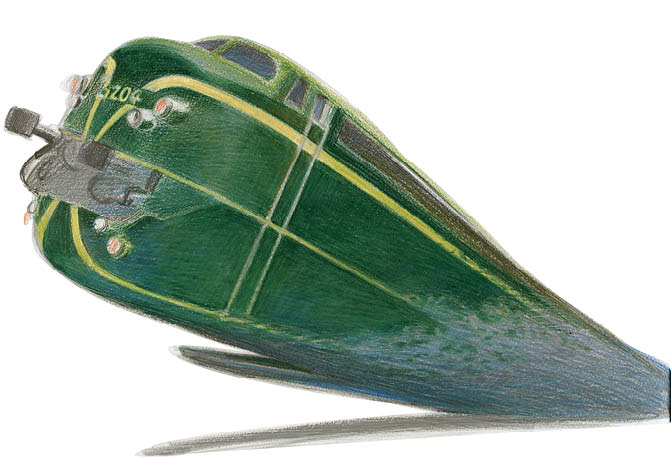 Moby-Train is a project by François Schuiten and sculptor Pierre Mater. The project will be build at the Van Praet Bridge in Brussels. It is currently entered in its study and funding phase.

Not far from the Port of Brussels and Train World is the Van Praet Bridge, one of the main entrances to Brussels. At present, this area, with its very blurred structure, has no clear architectural line. Train World, in collaboration with the Brussels-Capital Region, the City of Brussels and the Port of Brussels, wishes to give this masterly entrance a strong artistic visibility in the same spirit as the monumental gates that once marked the entrance to the cities. A sculpture, designed by two renowned artists, François Schuiten and Pierre Matter, will be placed on the Van Praet roundabout, situated in the extension of the bridge of the same name. This work will also be illuminated by the lighting designer Jean-Pierre Majot 1). 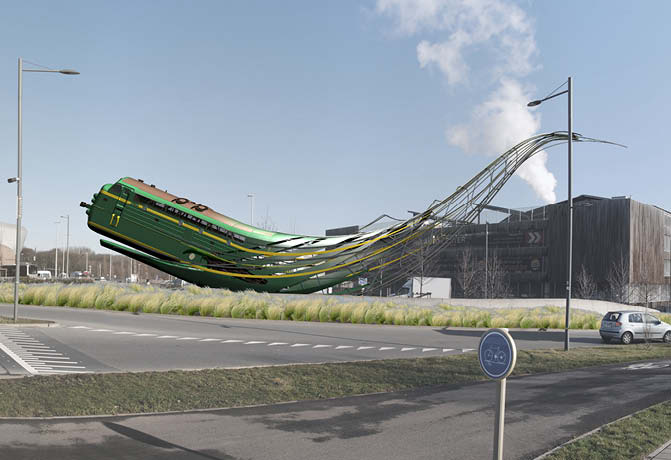 The proposed landscape scenography accompanies the imaginary world conveyed by the sculpture. It proposes a lively and sober allegory of the aquatic environment from which the sculpture seems to emerge, as well as an allegory of the landscapes passing by the railway lines. Movement, power and fluidity, the yellow and green chromatic range of the locomotive, are subtly declined by an oscillating and luminous grassy carpet. The simplicity of the plant language helps to harmonise the perception of the van Praet roundabout, to better highlight the central sculpture, a major focal point from all approach routes. The extension of the design along the access embankments to the cycle-pedestrian underpasses creates a unique and powerful progressive experience through the sudden proximity of the work to the end of the tunnels. The seasonal evolution of the grass blades from green to straw yellow and the permanent maintenance of the dense carpet guarantee the quality of the scenography throughout the year and the feasibility of future maintenance of the site 2).

During a meeting in Amiens in June 2022 François Schuiten talked about this project. Nicolas Rivoal made the following pictures.