You are here » The Obscure Cities » Dictionary » Great Eastern

Great Eastern is the name of a British ship, launched in January 1858 AD. It is the largest passenger ship of its time, almost five times longer than any boat that sailed before it.

It was propelled by seven masts and twelve sails, two paddle wheels 20 meters in diameter and a propeller with a 4 meters radius powered by ten steam engines. It caused the ruin of several of its successive owners and even some suicides.

This ship greatly impressed Jules Verne, who travelled on it in 1867 AD, and inspired to him the novels “A Floating City” and “Propeller Island”. According to researcher Mitya Suchin it seems that its engine room had, through unknown means, influenced the design of some of the machines of the Gwendoline quarter in Mylos.

A Floating City, by Ferm 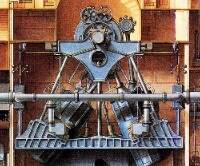 Propulsion machinery of the Great Eastern, by Derek Walker 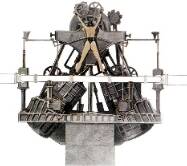 Gwendoline, by Schuiten and Renard
600.060 - Transport