You are here » The Obscure Cities » Dictionary » Fixorama 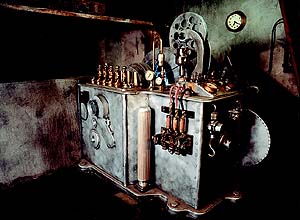 Fixorama is a form of entertainment developed in Alaxis, based on the projection of static images. The viewing room is by itself very popular with spectators because of its floor, made of soft cobblestones 1). It gives a general feeling not unlike that of the streets of Taxandria after the Great Cataclysm, which would tend to indicate that this country may have kept some contacts with the rest of the Obscure World, possibly through Marieville. An exact copy of the Fixorama, conceived by François Schuiten, was built in our world and lasted a few months in 1988 AD, during the Cités-Cinés exhibit of Montreal.