You are here » The Obscure Cities » Dictionary » Fannaux 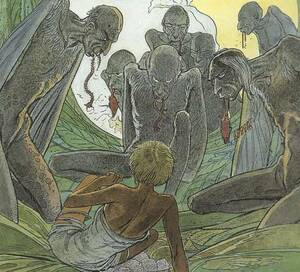 Fannaux are creatures of human appearance, with bird wings instead of arms. They can move freely between the Hollow Earths, and some of their inhabitants use their services to move from one world to another. All those that we have seen so far are apparently male; they are obviously related to Fanelles, but it is hard to be sure that they are of the same species. The term has been rendered as “insects” in some translations 1).