You are here » The Obscure Cities » Dictionary » Bayreuth 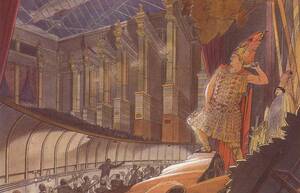 Bayreuth is a small town between Brüsel and Calvani. According to Friedrich, it is the site of a colossal Opera 1) capable of seating all of its inhabitants.

Bayreuth is also a city in the West of Germany, on the Main river. There can be found a theater built in 1876 AD by king Ludwig II of Bavaria exclusively for showing the works of Richard Wagner.