You are here » The Obscure Cities » Dictionary » Aquarica 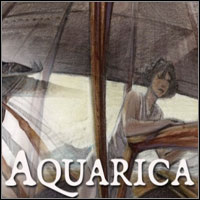 Aquarica was a long term project by Benoît Sokal and François Schuiten. It was in 2006 that game publisher White Birds announced its plans to create a video game called Aquarica 1).

White Birds was founded by Benoît Sokal, Olivier Fontenay, Jean-Philippe Messian and Michel Bams in August 2003 2). Sokal had already worked on games like Amerzone and Syberia at game publisher Microïds 3). After finishing Paradise he started working together with François Schuiten on Aquarica. The theme of the game would be about environmental issues and man’s relationship to nature. From the beginning there was also the ambition to turn the project into an animated feature film 4).

François Schuiten: “Initially it was a film project; so many designs, many sketches, character studies, costumes, situations… We have such a number of incredible drawings that we could easily publish 3 art books.” 5) 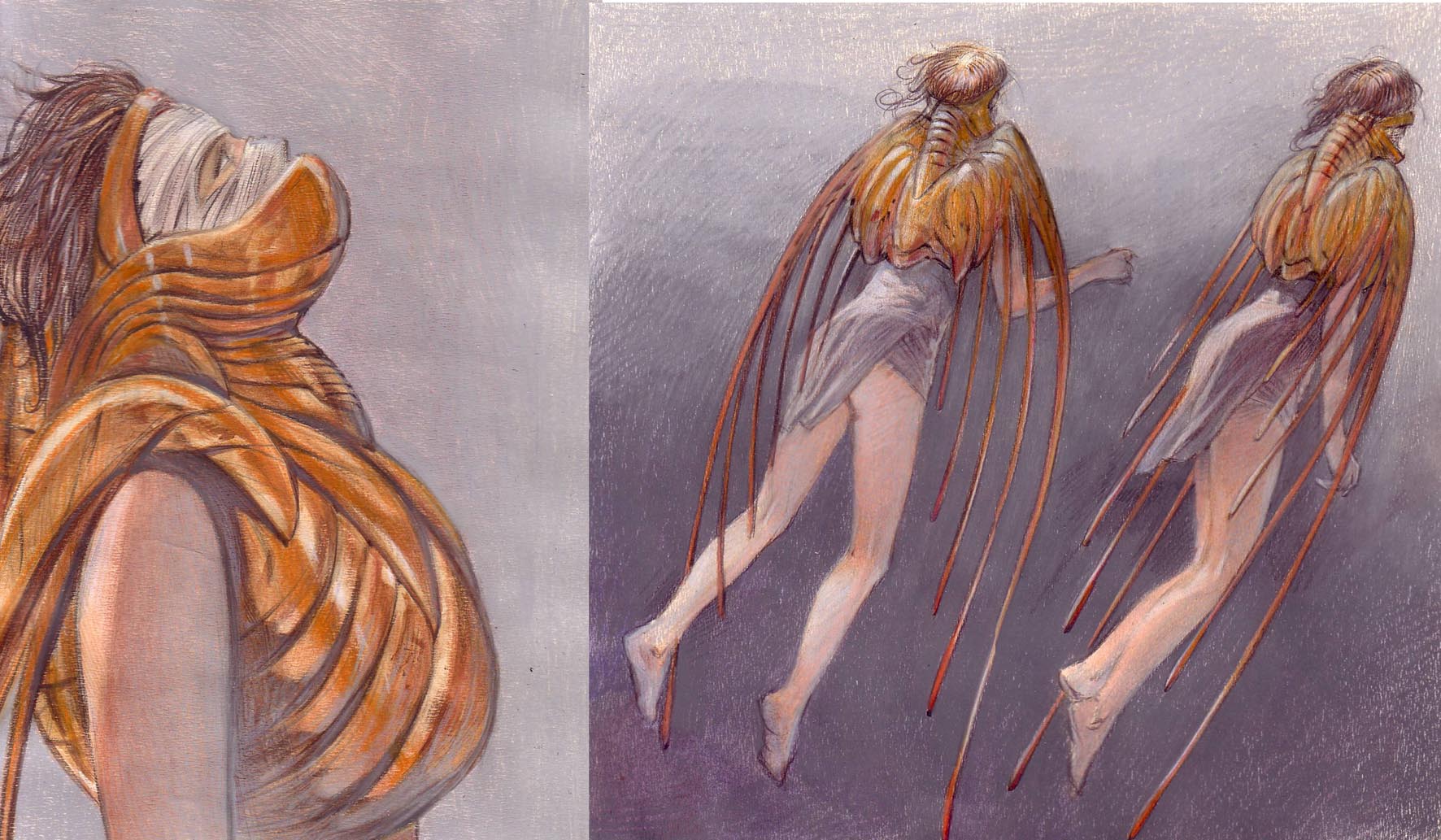 In 2012, filmmaker Martin Villeneuve joined the project, after working with François Schuiten on Mars et Avril. Sokal, Schuiten and Villeneuve picked up the idea of making an animated movie.

Aquarica will be an animated fantasy feature film – Villeneuve will direct, while Schuiten & Sokal will act as production designers. The film will be produced by Pierre Even (Brooklyn, C.R.A.Z.Y.) at ITEM 7 in Canada, in co-production with Europe and/or Asia 9). The project received development support from SODEC in 2013 and 2015, and from The Harold Greenberg Fund in 2016. The latest plan was to finance the film in 2019, and to produce it in 2020. But these plans were postponed due to the Covid-19 pandemic. Due to the death of Benoît Sokal in 2021 there are no recent plans. 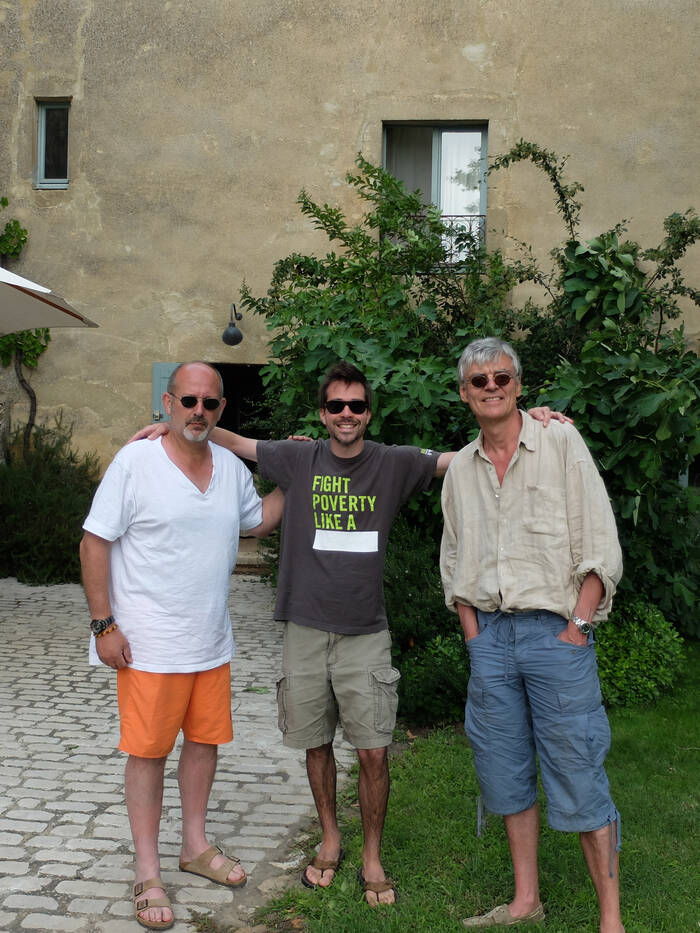 The project was also adapted into a comic book by Sokal and Schuiten. The album was intended to be published in two volumes by Rue de Sèvres 10). The first volume was published on October 11, 2017 11) 12). The second volume was not finished before the early death of Benoît Sokal in May 2021. François Schuiten will now finish the album 13).

François Schuiten and Benoît Sokal photographed by Martin Villeneuve during their working session in July 2014.

The idea of the story is more than 10 years old.

The original story takes place in 1932. One day, the inhabitants of Roodhaven – a once flourishing whaling port – discover a strange boat washing up on shore. It is assembled out of various bits and pieces of whaling ships that have long-since disappeared. Aboard this vessel, they find a young woman, Aquarica, who presents herself as the great-granddaughter of Jeremy Connolly, the captain of the schooner “Aquarica”, lost at sea over a hundred years before. She speaks of her people, who live on a mysterious island out in the middle of the ocean; an island that has, almost imperceptibly, started to slowly move northward, as if becoming alive and responding to a strange and irresistible call. What if the famous legend of the giant whales were true? Sailors the world over have heard about these mythic sea-beasts known as “mastodonwhales”, but no one has ever seen one. These gigantic whales are said to float in a state of near-lethargy at the heart of warm sea currents, their backs covered with mineral soil. A luxurious vegetation springs from these camouflaged garden-backs, even giving rise to an indigenous wildlife and an isolated tribe of humans. But once every hundred years, the mastodonwhales set out upon a voyage, back toward the frozen waters of their birth, in order to reproduce. For the love of Aquarica, a young scientist, John Greyford, will try to save the people of the island and above all preserve the mastodonwhale from the crazed and murderous whaling fleet of Captain Will Baltimore, fierce commander of the fastest whaling ship in history, the “Slayer”.

If the story told in the comic books, or even in the movie, follow these lines is still uncertain. According to its title, La Baleine Géante, the second volume will introduce the giant whale. 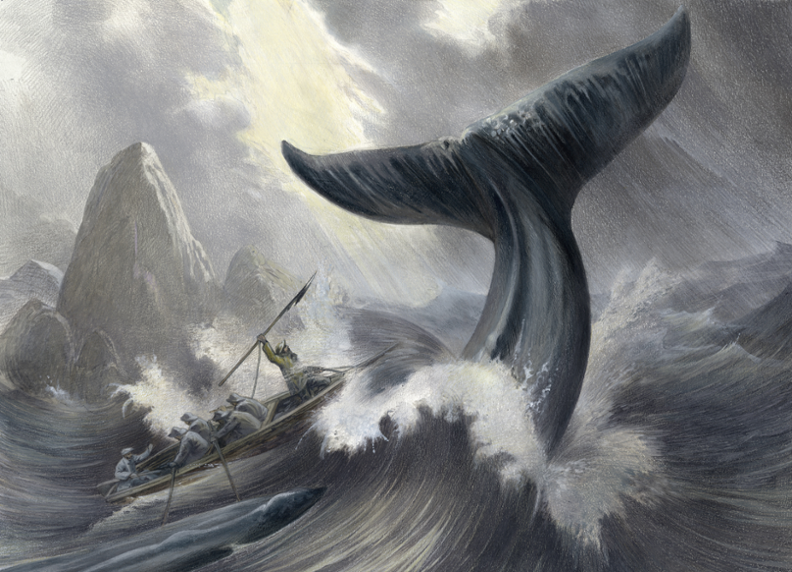 Gallery with the first sketches by Sokal and Schuiten for their Aquarica project.