Paris au XXe Siecle [Paris in the 20th century] is a science fiction novel by Jules Verne. The book presents Paris in 1960, about 100 years in Verne's future, where society places value only on business and technology.

Written in 1863 but first published 131 years later (1994), the novel follows a young man who struggles unsuccessfully to live in a technologically advanced, but culturally backwards world. Often referred to as Verne's lost novel, the work, set in August 1960, paints a grim, dystopian view of a technological future civilization.

Many of Verne's predictions were remarkably on target. His publisher, Pierre-Jules Hetzel, would not release the book because he thought it was too unbelievable, and its sales prospects would be inferior to Verne's previous work, Five Weeks in a Balloon 1). 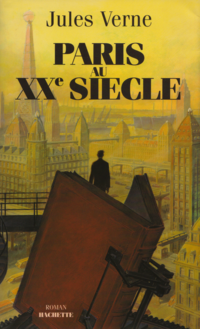 The first edition of Paris au XXe siècle was published in 1994 by “Hachette, le cherche midi éditeur” in Paris. Preface and establishing text by Piero Gondolo della Riva. Avant-propos de l'éditeur by Véronique Bedin. The cover of this paperback with dust jacket was made by François Schuiten 2). 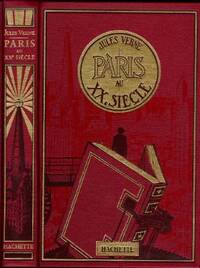 Paris au XXe siècle (followed by: Une Ville Idéale) was published in 1995 by Hachette, le cherche midi éditeur, Paris in a deluxe version. This book has the look and feel of an old Hetzel, with gilt edges and with establishing text by Véronique Bedin and Piero Gondolo della Riva 3).

The illustrations are by François Schuiten.

Below you can see the images from the deluxe album.