You are here » The Obscure Cities » Albums & books » Metamorphoses 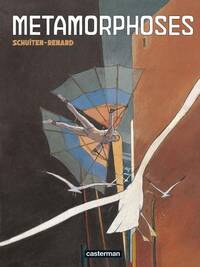 Metamorphoses brings together by two stories written and drawn by Claude Renard and François Schuiten in the early 80: Aux médianes de Cymbiola (1980) and Le rail (1982), first published in the monthly magazine Heavy Metal before being published in albums by Humanoids.

The first story, Aux Médianes de Cymbiola, is a poetic variation on the myth of Icarus and geomancy, in the grandiose setting of a desert world. It already shows a taste for urban utopias that we will find in Les Cités obscures, the mythical series created by Schuiten with Benoît Peeters.

The second story, Le Rail, is a futuristic tale in colour. At the controls of his automated vehicle, the trade unionist William Davis has just completed a distant mission. Gliding at high speed on a rail across a deserted moor, he suddenly breaks down. A disturbing adventure begins…

It also includes the Express port-folio.

The 2022 editions are larger than the original ones. This edition has also a dossier with sketches and drawings.