Mars is an imaginary travel book in the Louis Vuitton Travel Book Collection. In a not so distant future of exponential population growth and record temperature rises, vast stretches of formerly arable land have turned into deserts. a man and a woman, the new era’s Adam and Eve, are sent on a mission to mars to explore the red planet and the possibilities it might offer for human survival. 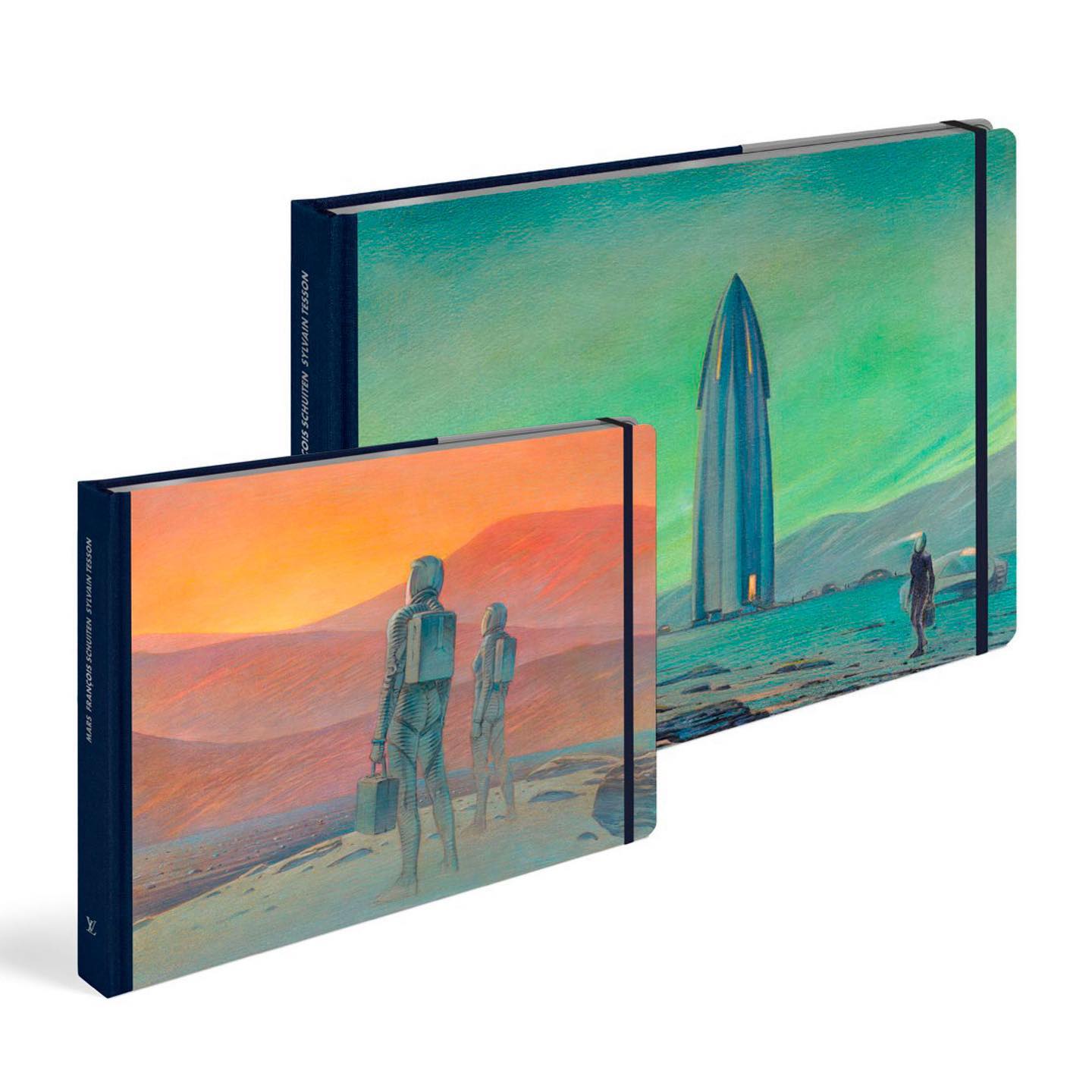 François Schuiten is responsible for the illustrations of the book. Sylvain Tesson will write the texts 1). Sylvain Tesson, born on 26 April 1972 in Paris, is a French travel writer. A geographer by training, he chose at a very young age to undertake journeys and expeditions in often extreme conditions (crossing continents by bicycle or on foot) from which he brought back notebooks or films. Author of travel stories and books of reflection, he is the winner of numerous literary prizes, including the Goncourt short story prize in 2009 and the Renaudot prize in 2019 2). 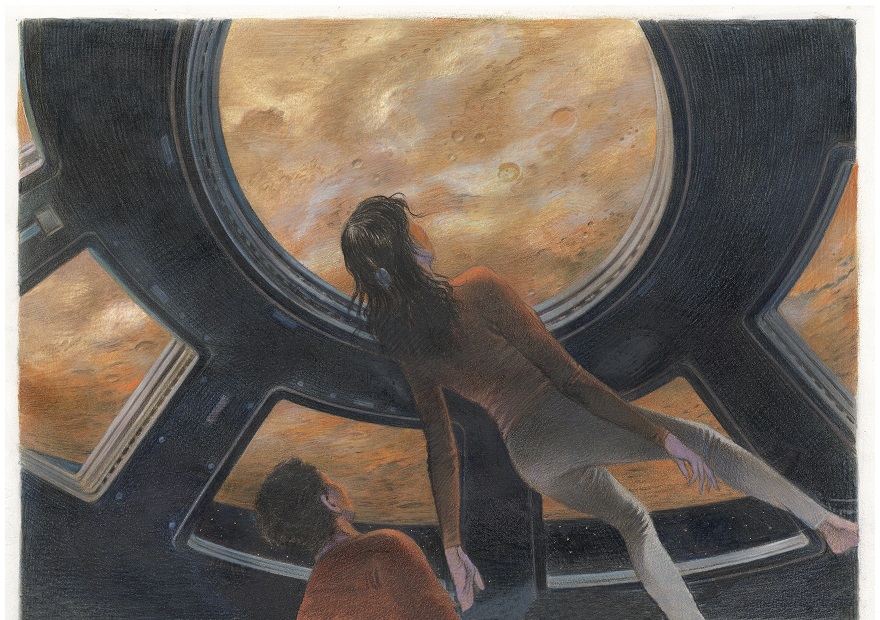 The encounter with the writer Sylvain Tesson was a decisive one for Schuiten. “Only someone with a long experience of solitude and silence, of cold and endurance, someone with a passion for the electrifying beauty of natural landscapes, could visit these uninhabited spaces,” says the artist. “Mars is the mirror of Earth and its fragility. Looking at my illustrations, Sylvain immediately began telling me the story of my book. His ideas put everything in place. They guided me through to the end of the journey. The most beautiful thing is something that remains unsullied, pristine. How can we protect these immaculate places when the colonization of Mars has become the challenge of the century for space explorers? I’m torn between utopia and dystopia. There are always gray areas. That’s the complexity of reality, and it’s also what propels the story forward.”

Louis Vuitton’s Travel Book series lies somewhere between the travel journal and the sketchbook, inviting artists from around the world to create illustrations devoted to a country or a city. The collection offers a new, contemporary vision of travel, exploring both remote wildernesses and cities that never sleep while confronting an unfamiliar place with a viewpoint sharpened by the surprise of the unknown or stimulated by the pleasure of rediscovery. This vision of a place as a blank page inspires commentary that may be narrative, affectionate, satirical or picturesque through diverse modes of expression including drawing, painting, collage, contemporary art, illustration, cartoons and manga. 3) 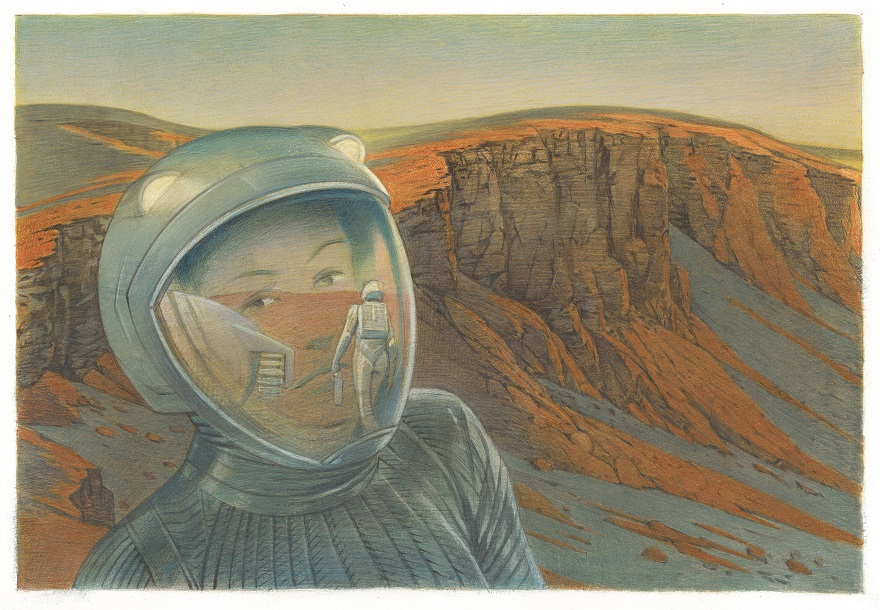 “I’m not really a big traveler,” admits François Schuiten with a smile. “My life is divided between Paris and Brussels, between one studio and the other. In truth, my drawing table is my map of the world! I set off to discover Mars like an explorer, without any preconceived ideas, immersed in the photographs taken by space probes, surrounded by books, maps and rock samples. I listened to the sound made by the wind, observed the layers of different minerals and the reflection of light on the landscapes… I ended up losing myself in the canyons and the forests of mineral spikes, shivering beneath the ice clouds, my view sometimes obstructed by eddies of dust. Mars is not just a red planet. There’s an infinite variety of geographical and geological nuances, well documented from space thanks to satellite imagery and, on the ground, through the data collected by the rovers. I wanted to offer a vision of the planet on a human scale.”

Schuiten draws instinctively, without deciding on a narrative beforehand, so as not to “overly intellectualize” his approach, instead allowing himself to be guided by emotion and desire. “I relied uniquely on the work of the hand, light, colors and materials,” says the artist.

“I was looking for a new, more radical language. The panoramic format was liberating for me, giving me a fresh perspective. It offered a chance to breathe, as distinct from my work in comics. The use of double‑page spreads gives a 180-degree field of view, widening the horizon. It was also ideal for placing emphasis on colors. I avoided my usual anchors in the composition: there are no stark outlines as in comics; here color fully plays its role with various layers and techniques to create the sfumato.”

Schuiten concealed the initial lines with brushstrokes of acrylic paint, then pigment pencils were used to achieve denser colors, followed by another layer of oil paint. Thus, the rocks bead with moisture under their brilliant veil of glazing and the huge expanse of sand and gravel becomes a vast plain bristling with ghostlike shadows. “I came up against two kinds of loneliness,” says Schuiten, “that of the illustrator at his drafting table and that of the empty landscapes. I veered between exaltation and apprehension, wonderment and uneasiness, just like the two figures I had imagined, a man and a woman, alone in the immensity of the scene. The red planet still features in many a childhood dream, and I wanted to capture that fascination. Above all, it is that child that I was seeking to reach.” 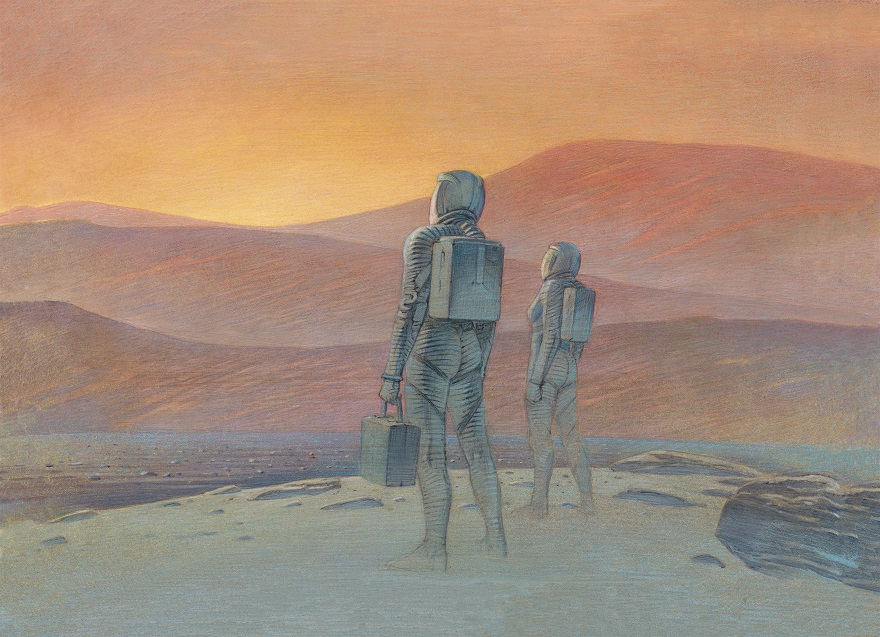 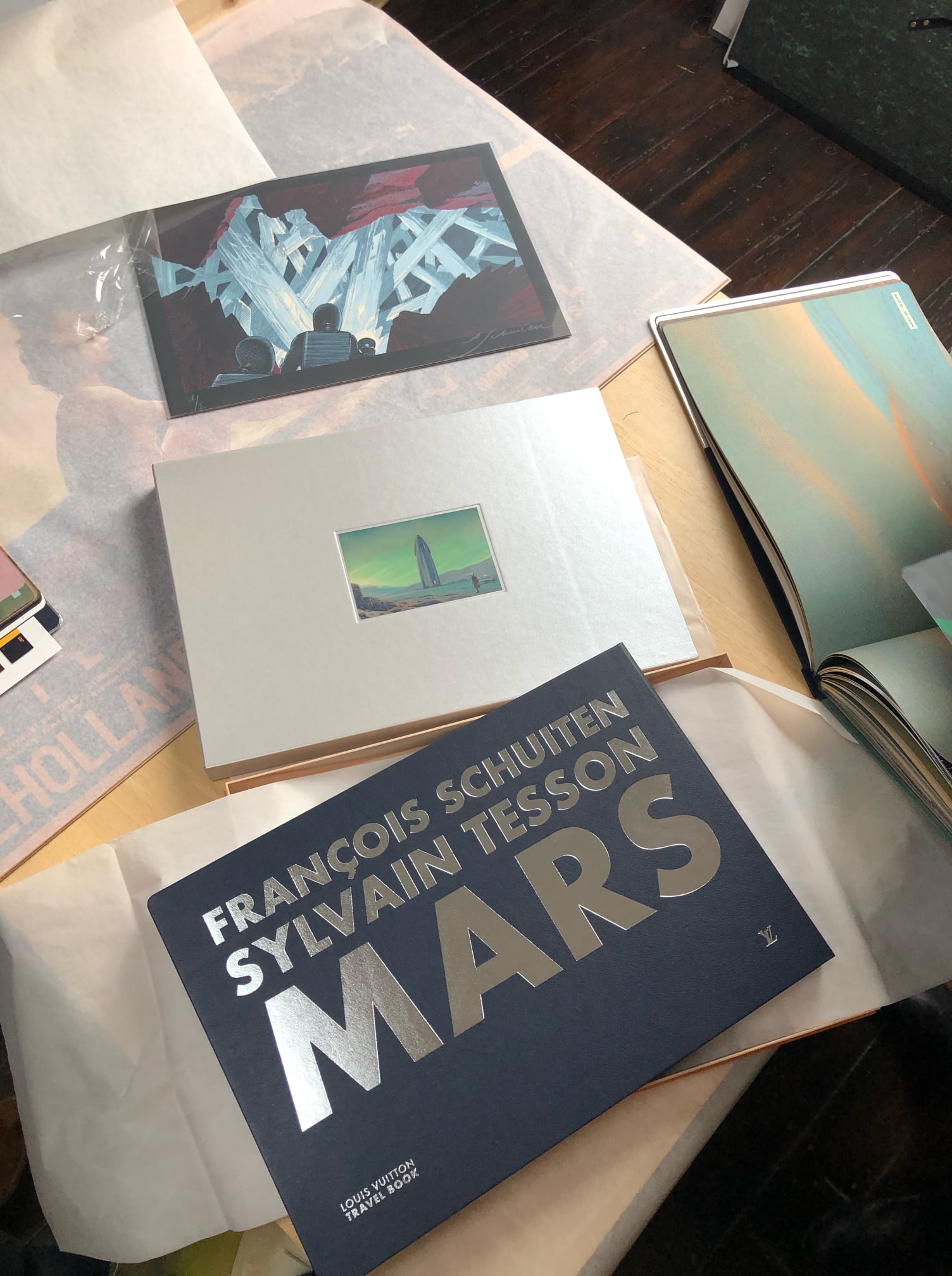 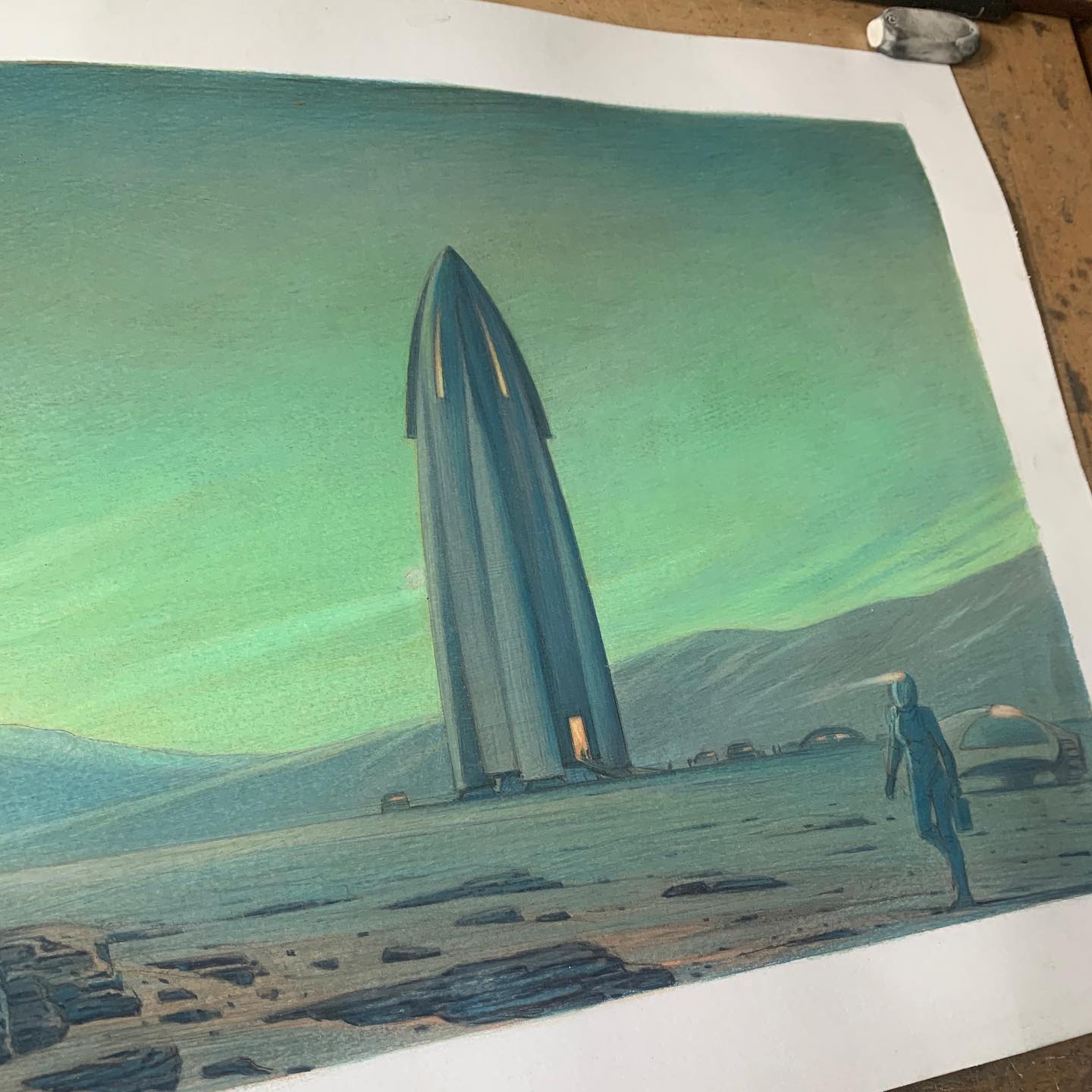 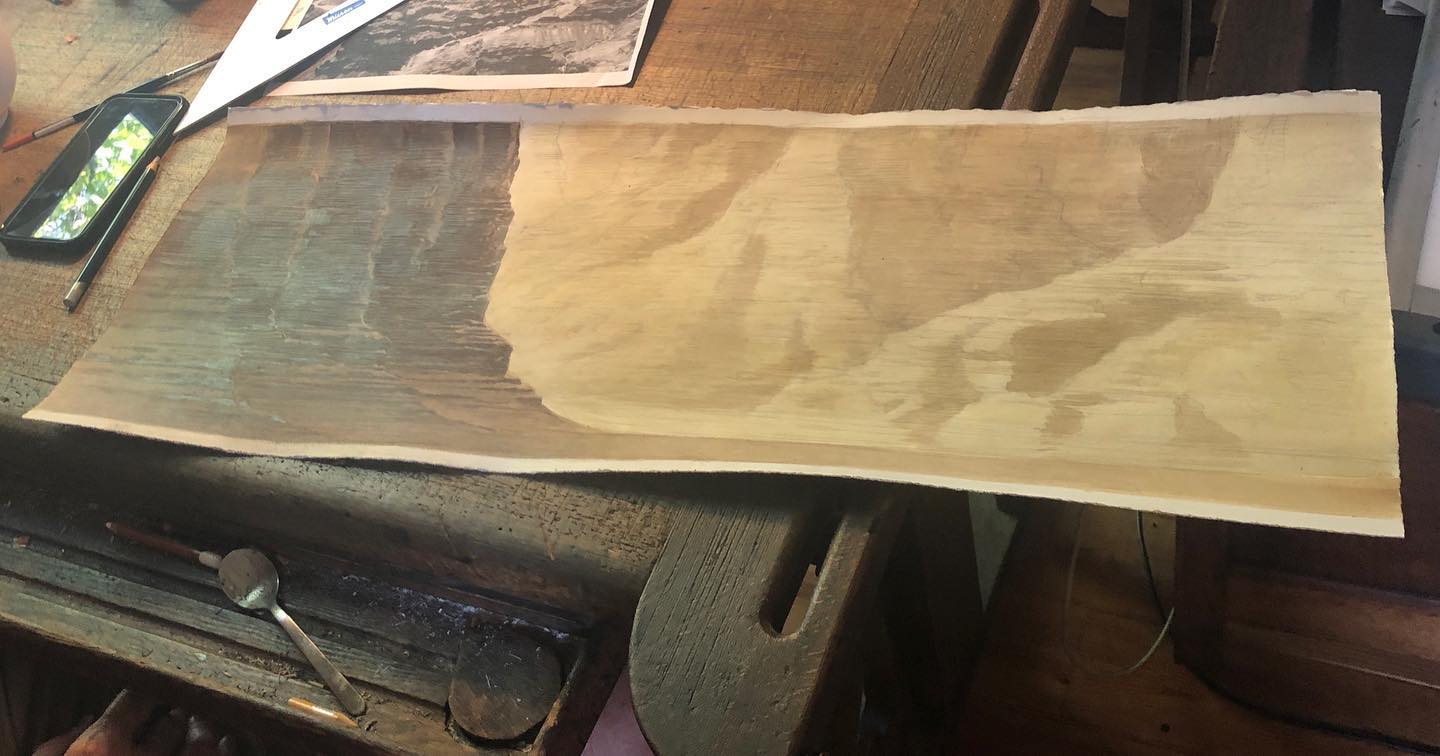 In June 2020, François Schuiten announced that he spend most of his time in confinement due to Covid-19 on making images for his book in this collection. 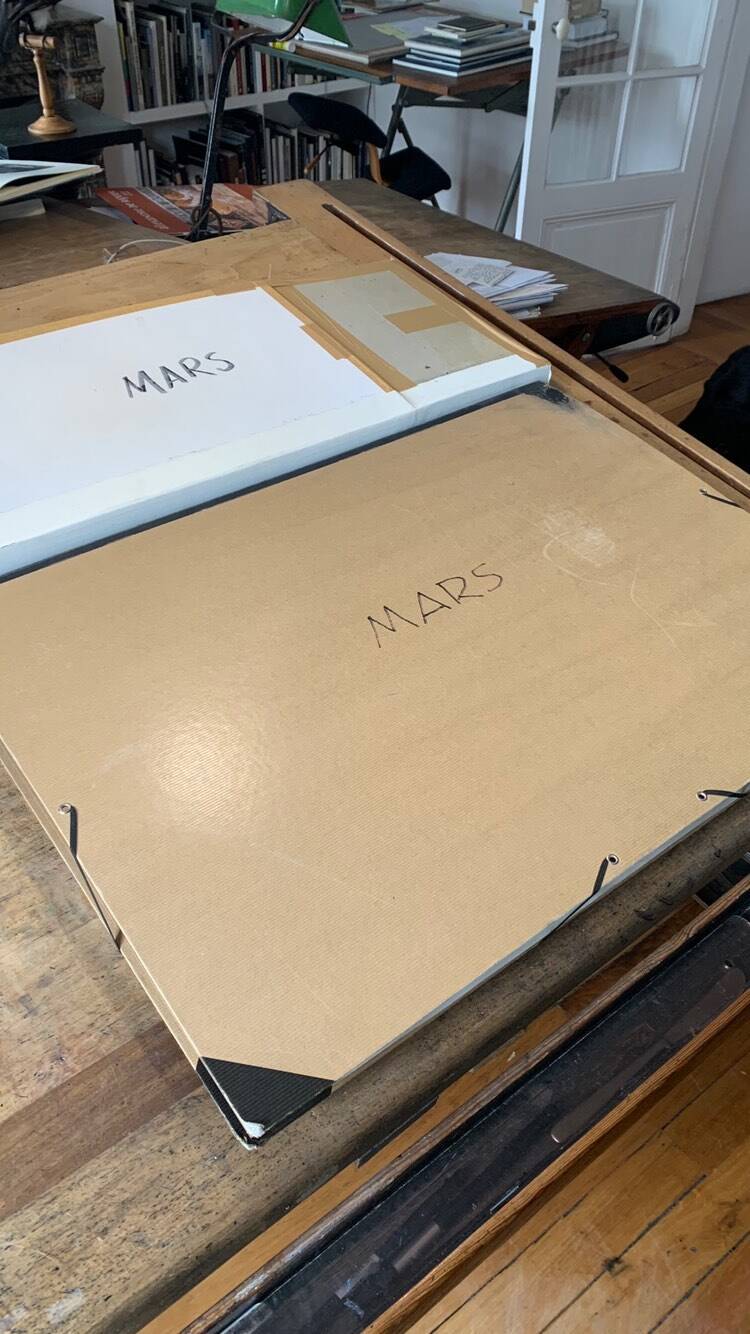 “I am not a great traveller. I live between Paris and Brussels, from one studio to another. My map of the world, is my drawing table”, smiles François Schuiten. “I set off to discover Mars like an explorer, without any preconceived ideas, immersed in the pictures of the space probes, surrounded by books, maps, rock samples. I listened to the sound of the wind, observed the strata of the different minerals and the effects of light on the rocks. I ended up losing myself in the depths of canyons and in the forests of mineral spears, feeling the cold of the ice clouds, my view sometimes blurred by dust devils. Mars is not just a red planet. There is an infinite variety of geographical and geological nuances, well documented from space by satellite images and, from the ground by rover data. I wanted to offer a vision of the planet from a human perspective.”

Some sketches and images from the travel book as posted on the social medias before the release. 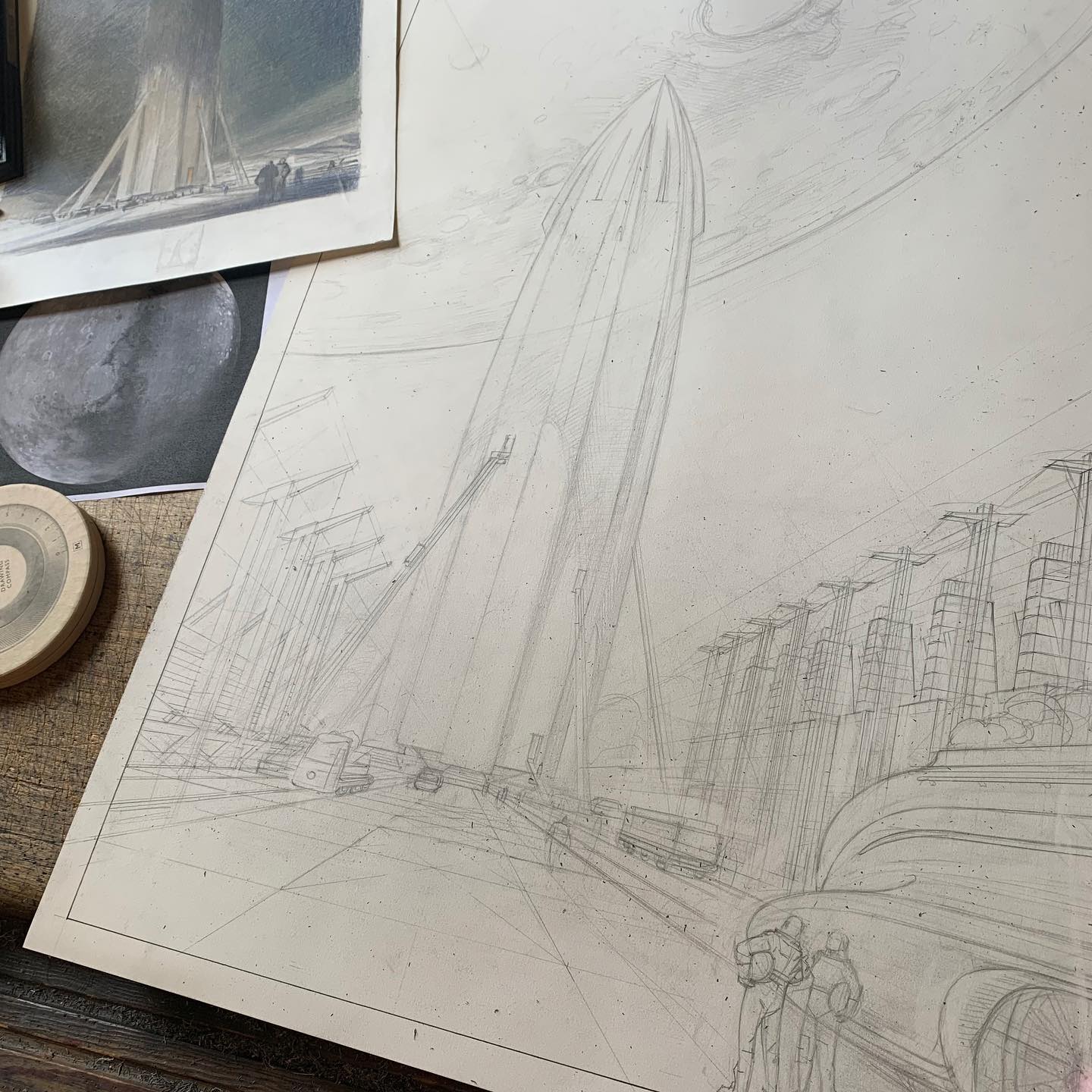 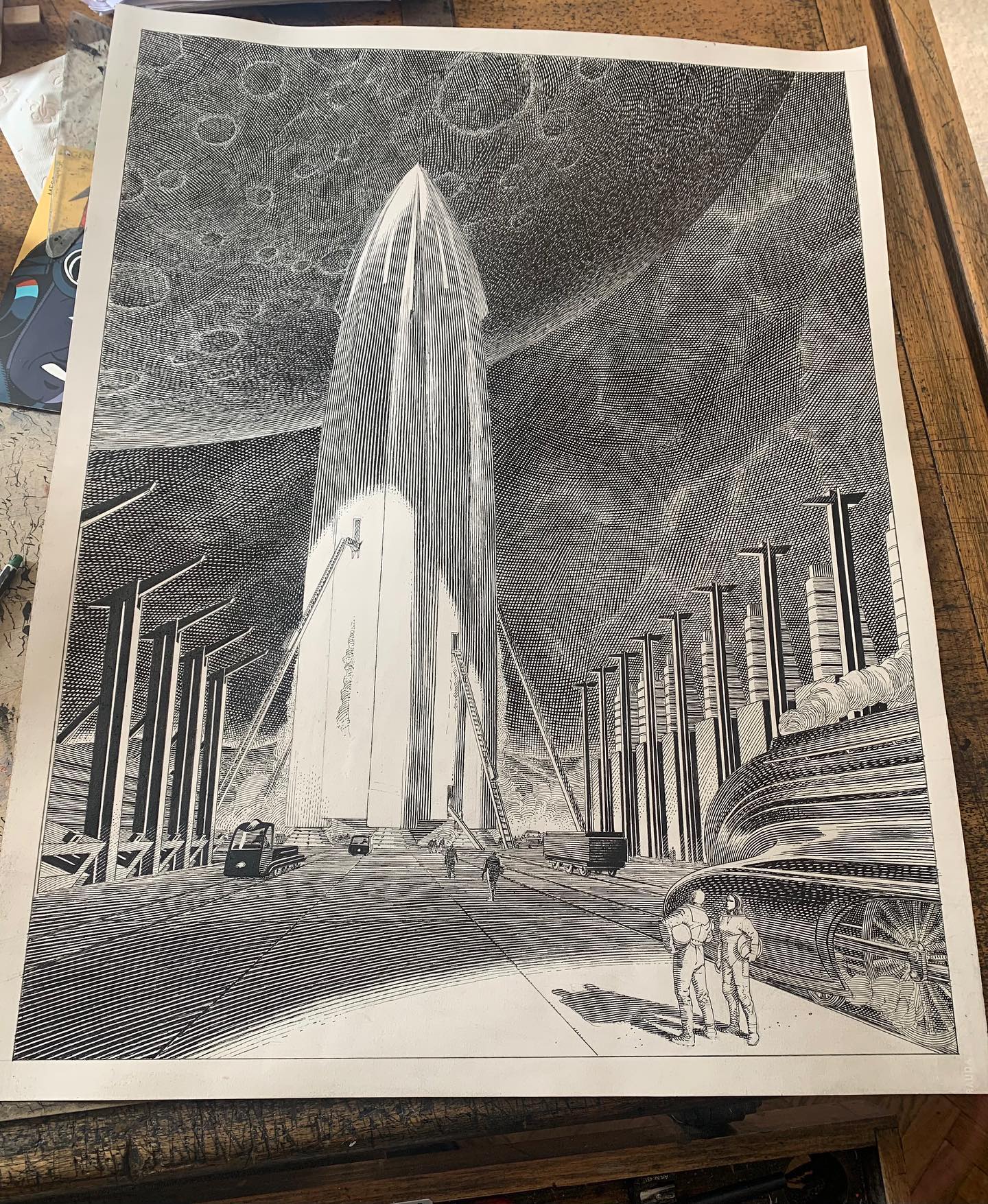 With the release of the book Atlantic12 will publish a screen print. Based on the drawing by François Schuiten, Laurent Durieux added the colours. 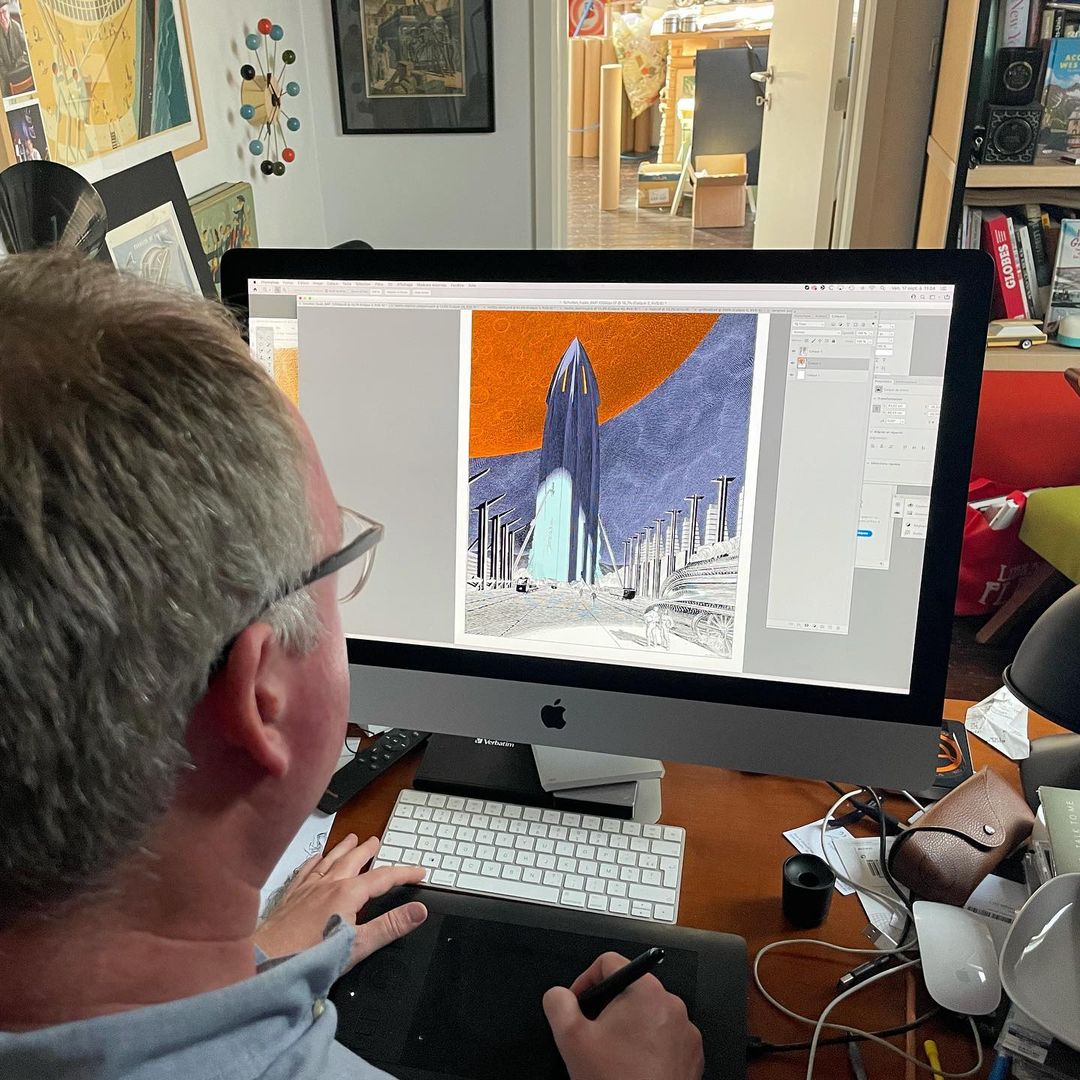 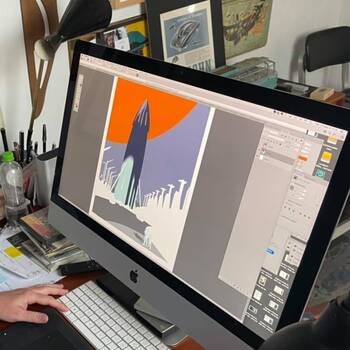 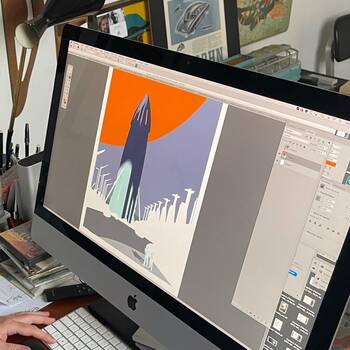 Louis Vuitton published a press kit with the release of the book. 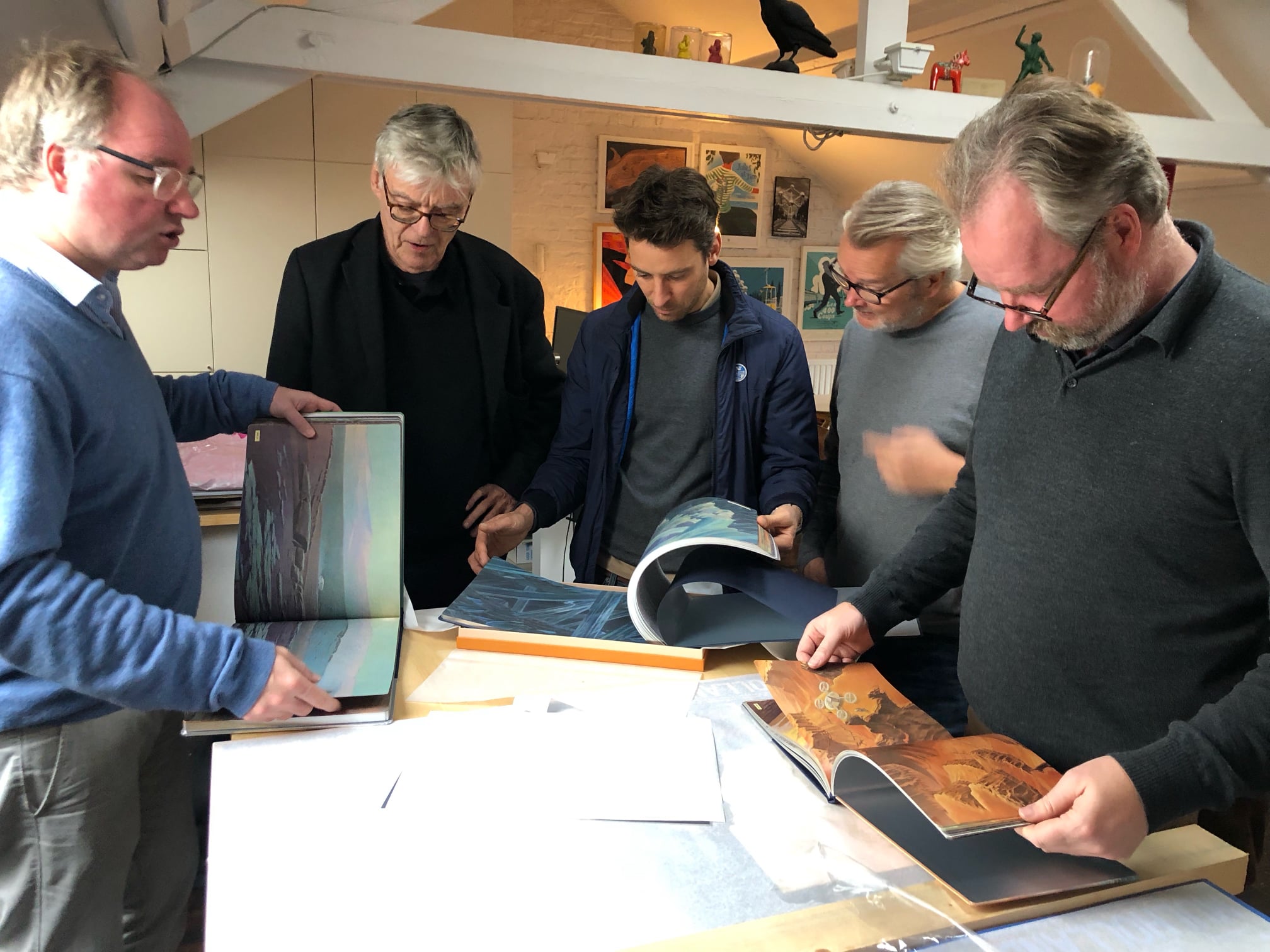