You are here » The Obscure Cities » Albums & books » Machinistes (Les) 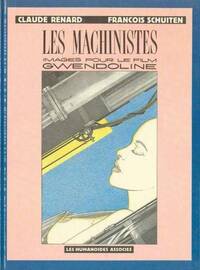 Les Machinistes is a description of Mylos' Gwendoline Quarter, by François Schuiten and Claude Renard.

The book introduction is by Jean Luc Fromental who collected the images and converted it to a book with the help of Thierry Smolderen. This book is about a movie that is never made.