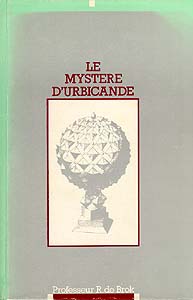 Le Mystere d'Urbicande, [the Mystery of Urbicande] is a very rare booklet, written by Régis De Brok and illustrated by Robert Louis Marie De La Barque. It describes the myth of the Network. Only 1900 copies were originally published in Brüsel. One of them, with copious side notes by Robick, somehow reached our world and was reprinted in 1985 AD 1).

It can probably be said without fear of being proven wrong that the publication of this booklet, by Schlif-Book in 1985, marks the point where the Obscure Cities started acquiring a life of their own.

Following the success of La fièvre d’Urbicande, Thierry Smolderen wrote, under the name of Regis de Brok, a companion piece on the effects of the Network on the Obscure Cities. François Schuiten, under his own pseudonym of Robert Louis Marie de la Barque, provided the illustrations.

Supposedly published fifty years after the Urbicande events, after the city has been destroyed by an earthquake, the book is written as a scientific rebutal of the existence of the Network, now seen as a collective hallucination or a pure myth. The interesting part is that the copy we get to read comes from the library of the Sixth Hospice of a city called Brüsel, and it has been heavely anoted by a patient named Eugen Robick… 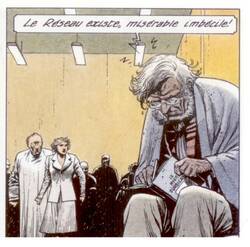 The booklet itself was extremely well done. The cover has a convincing “aged” look, rice paper pages protect illustrations in the maner of ancient prints, and Robick’s note really appear hand-written. Each book came complete with a library card and a separate note from Professor von Scholz, warning the staff not to loan it to Robick…

An intact copy will easely fetch the equivalent of $150 US, when it can be found at all. There are apparently a number of pirated copies on the market, and some of them are close enough to the original to pass as genuine. It has been translated into German, but not yet in English. Most of the illustrations have been reproduced in the 1992 re-edition of La fièvre d‘Urbicande.

In the album Brüsel we see Eugen Robick furiously trying to annotate a copy of Le Mystere d'Urbicande.

As Le Mystere d'Urbicande is very rare we can present you the pages of this book in the following gallery.