You are here » The Obscure Cities » Albums & books » Musée A. Desombres (Le)

[The A. Desombres Museum] Sixth volume of the Chronicles of the Obscure Cities, published in 1990 AD. Unique for its inclusion of a soundtrack.

There is a small play on words in that title: said aloud in French, it sounds like “The Museum has Shadows”. This is appropriate, because this particular album started as a travelling cartoon exhibit called Le Musée des Ombres (the Museum of Shadows). In addition to their undeniable skills as storytellers, Peeters and Schuiten are also quite talented as scenographes, or designers of exhibitions. It is a demanding craft, that requires balancing artistic vision with the physical demands of the real world. For Le Musée des Ombres, the final setup included a crumbling museum where cartoons were displayed as the last remnant of a forgotten art, of interest only to some few old people… While not specifically centered on the Obscure Cities, the exhibit had many elements reminiscent of that universe, and eventually included a sound play about it.

Out of this concept, Le musée A.Desombres came out in 1990. The handsome folding jacket contains two parts: a catalogue of paintings by a little known turn-of-the-century artist, and a CD soundtrack. The book also included several photographs by Marie-Françoise Plissart, who has collaborated extensively with both Schuiten and Peeters.

The catalog is full of references that will be immediatly recognized by people familiar with the Obscure Cities. Some of them are very subtle, and can be understood only by those who already have a deep knowledge of that world.

The publication of this album also had an interesting side effect: there are now people who are quite certain that an artist named Augustin Desombres really lived in the 19th Century… 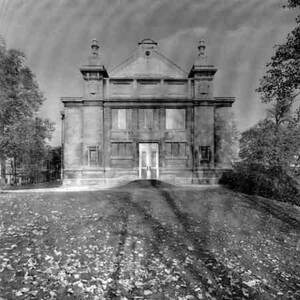 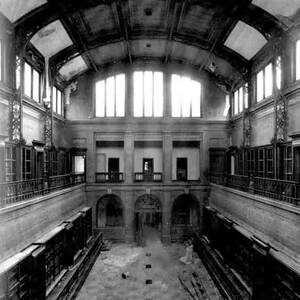 The play opens with a dedication by a man speaking French with a Dutch accent: Koelber, using an unfamiliar recording device. Follows an art auction where a painting by Desombres reaches a fantastic price. We then hear a conversation between Koelber and his associate about how popular Desombres' work has become, and how mysterious the character was (the name litterally means “of the shadows”). Augustin Desombres is beleived to have committed suicide, but his body was never found.

To find more paintings, Koelber goes to Desombres' last known residence, and finds a crumbly museum where a lone elderly guide stands guard. With a couple of other tourists, the visit starts. Strangely, the lights are controlled by timers and the time allocated to view each painting is strictly limited. One painting fascinates Koelber, that of a young girl with an indistinct face. He stays behind unnoticed and, just as the lights goes out, takes a picture with his flash camera, something the guardian had strictly forbidden.

Gradually, we discover that the paintings are in fact gates to the Obscure World, and that Koelber is stranded in a darkened mansion. Some years ago, Desombres came to the world of the Cities and befriended Mary von Rathen, Eugen Robick and Axel Wappendorf. Since then, they have been trying to open a passage from their side, each for his or her own reason. Mary is obsessed with the idea of visiting our world, Robick dreams of rebuilding it like he did Urbicande, and Wappendorf is fascinated with the scientific aspect of the whole thing. 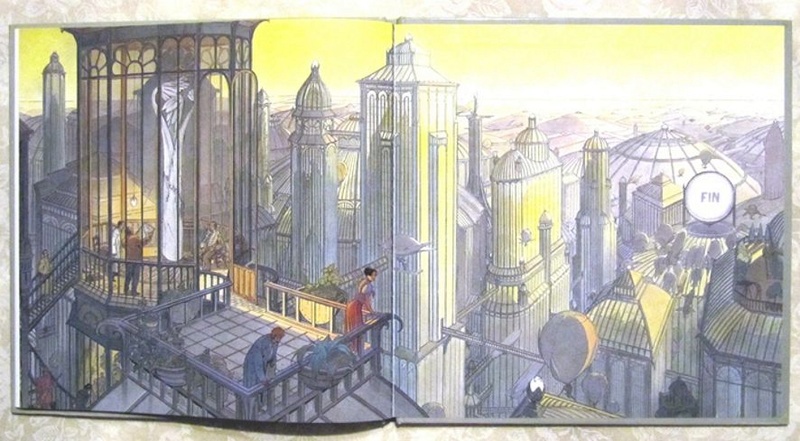 Koelber falls in love with the voice of Mary, but cannot see her because all the lightbulbs have been removed to allow the paintings to be seen from the Obscure side. Every time the lights are turned on in the Museum, the reverse side of the images becomes visible for them. It seems that the old guardian is in fact Desombres himself, very obsessed with Mary but for some reason he does not want the link between the worlds reestablished.

Eventually, Wappendorf deducts that Koelber went through because the wavelenght of the light generated by his flashbulbs is exactly right to open the doorway. He asks Vigoleis for a bulb so he can analyze it, but there is only one left so Koelber refuses.

Finally, the visitor cannot resist any longer: he has to see the face of Mary. He uses his last flash to get a glimpse, but she was standing next to a painting…

In short, the whole story is a sequel to L'Enfant Penchée, even though it was conceived much earlier. This album is getting increasingly rare, but can still be found in specialized stores. While there are no plans to re-edit the volume as such, Schuiten and Peeters have plans for a somewhat different version, possibly involving a CD-ROM rather than an Audio Compact Disk.

The audio is included as an audio cd. We have added the tracks of this cd so you can listen to the “Dramatique Sonore”.

The album is not available anymore.