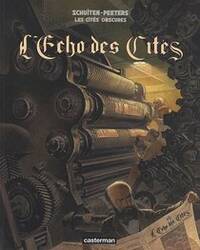 L'Echo des Cités is a large size album, published by Casterman in 1993. The periodical (A Suivre) had previously published several pages of that work as a folding supplement, but there are several differences between the two prints. It can be considered to be the eight installment of the chronicles.

While it is lavishly illustrated, it is the text that occupies an important part in this album. The entire work was entirely, and very skillfully, hand-lettered by Etienne Schreder. Several photographs by Marie-Françoise Plissart illustrate the later days of the newspaper.

This large size album reproduces select pages from a famous newspaper of the Obscure World, from its first issue to the last one. Covering a period of several years, this collection let us know of major events in the life of the Cities the way its inhabitants learned about them. We discover, for instance, that the Obscure World has its own calendar, that Captain Nemo - or perhaps Jules Verne - has visited a city called Samarobrive, that Robick had people fined or even expelled for making small changes to their houses in Urbicande, that the city of Alta-Plana is devoted entirely to archive keeping, and much much more.

The first issue was published in April 719 AT, with an editorial by Elmar Obstig von Offenstein. The latter was replaced less than two years later by Stanislas Sainclair, originally an assistant draft editor. Sinclair remained at the head of the paper until it folded, in 762 AT. First published only from Trahmer, the Echo soon became extremely popular, and was eventually printed in five languages all over the Continent.