You are here » The Obscure Cities » Albums & books » Compelled (The)

The Compelled is a sci-fi novella written by Adam Roberts and the first book-length science fiction publication that François Schuiten has illustrated. The digital publication was published by NeoText in August 2020. The first book has 167 pages. A second book is expected. 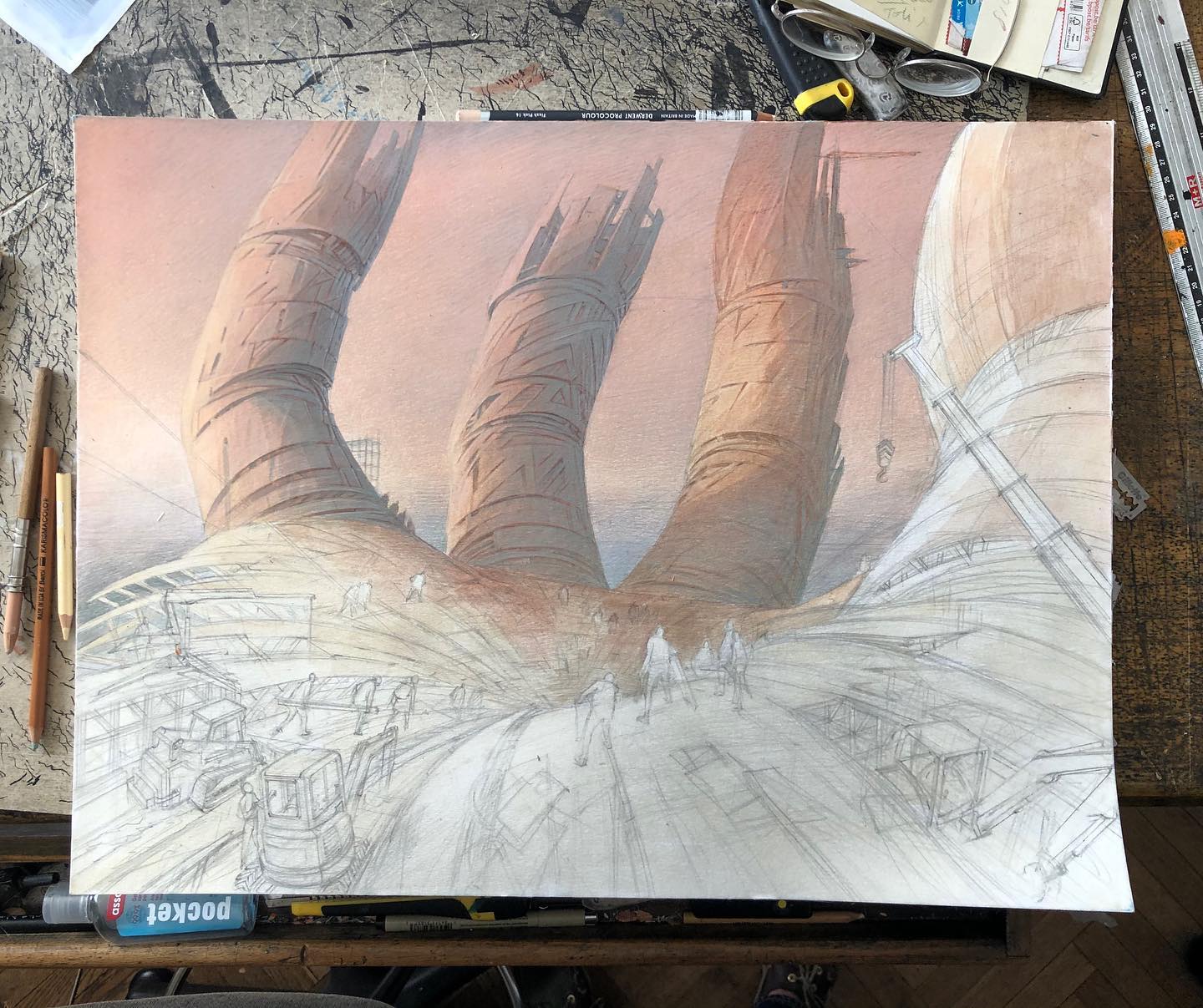 “In writing The Compelled I was hoping to create a mood of properly science-fictional mystery, a sense-of-wonder that works as much through a series of visual images as through consecutive story-logic and rational worldbuilding,” said writer Adam Roberts. “Writing was a process of juggling lots of different characters from lots of different backgrounds and situations and slowly bringing them together for the big finale. It’s quite a complex machine, but I hope all the individual parts move together to spin the mechanism and stir something strange into motion.” 1)

Adam Roberts: “The initial concept was John Schoenfelder’s. He came to me, in the early stages of laying the groundwork for NeoText, with two propositions: one that I take this premise (that people are driven for reasons they don’t understand to take various kinds of stuff and place it elsewhere, such that strange structures and even alien machines begin to be assembled, and nobody knows why) and run with it, write a short novel exploring it and developing it” 2). 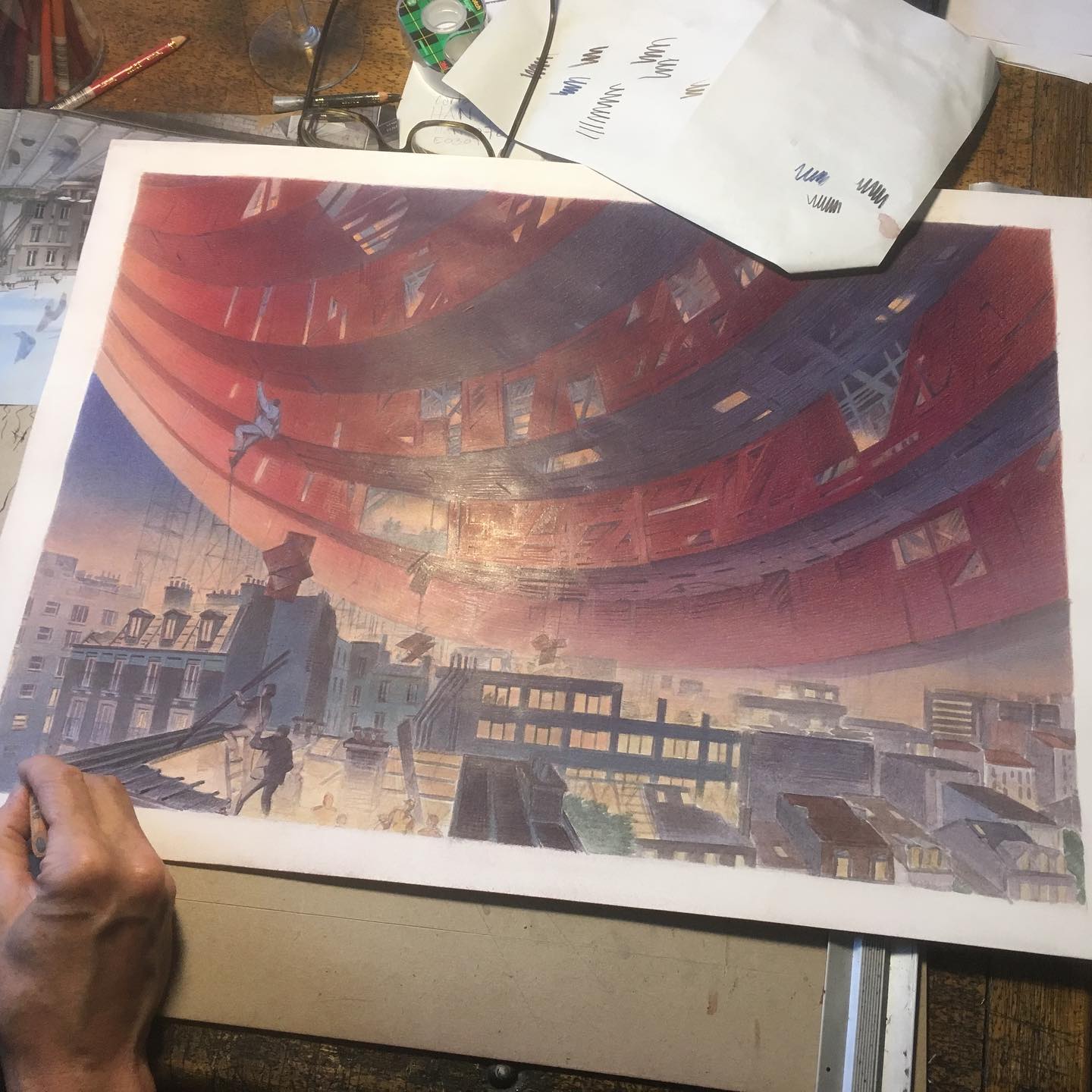 “The other was the opportunity of working with François Schuiten. Both were pretty exciting to me, I must say. John then gave me and François carte blanche to develop the concept any way we wanted” 3). 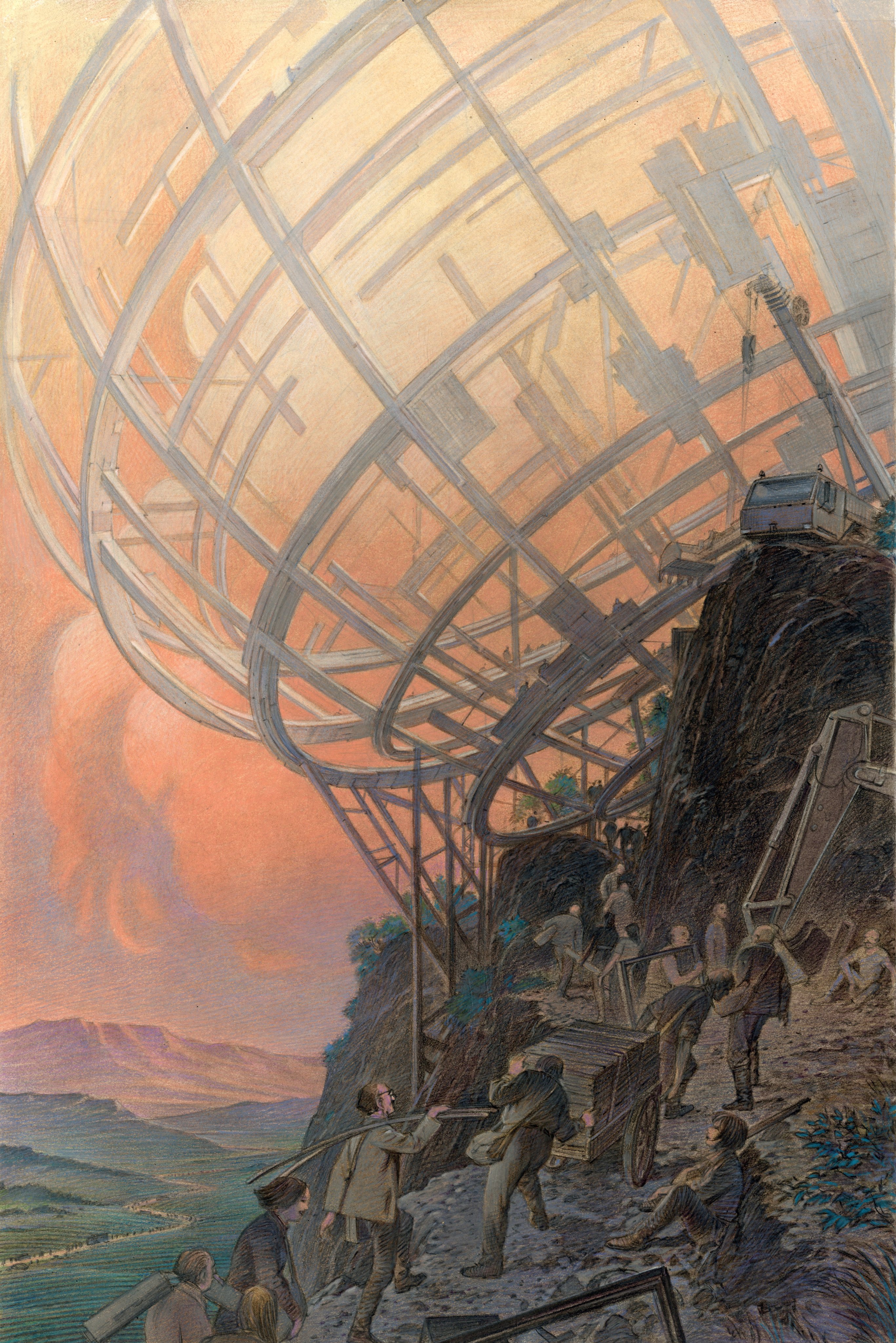 The Compelled is accompanied by the breathtaking stylized art of renowned French-Belgian artist François Schuiten and is the first book-length science fiction publication that Schuiten has illustrated. “One of the most exciting things about this project was the chance to work with François Schuiten, an artist I have long admired, and whose work resonates so brilliantly and powerfully with that kind of dream-potent visualisation in The Compelled,” said Roberts 4). 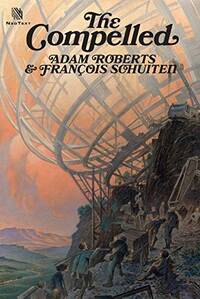 Cover of the Compelled by Schuiten

Adam Roberts: “François is great; it was a pleasure and an honor to hang out with him. I took the train over to Paris a couple of times to chat with him about how to develop the story in ways that would best suit his illustration style, which (visiting Paris, sitting in his apartment as he sketched possibles in front of me, lunching in a Montparnasse café in the sunshine, chatting about art and science fiction) was very far from being a hardship” 5).

“Plus, of course, he’s a giant of the contemporary bande dessinée world. The only wrinkle was that his English isn’t wholly fluent, so his partner stayed with us to help translate. Now, I speak a bit of French, but … the truth is I speak French like an Englishman. Badly, and with an atrocious accent. Nonetheless after a while his partner figured: oh, Adam speaks French, I’m not needed, and went off to do her own thing. It was fine for a while, but as the day went on, and especially after the wine was opened, and Francois began speaking more rapidly and more idiomatically … well there’s only so many times you can say to a person “excuse me, could you repeat that? I didn’t quite catch …” So towards the end I was smiling and nodding and getting a, shall we say, more impressionistic sense of what he was hoping to do with the art. It worked out OK in the end, so maybe that was a bonus, actually. Perhaps more people should try it” 6). 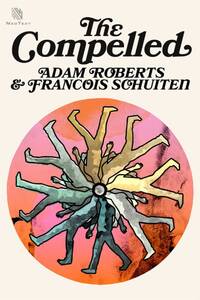 The Hollywood Reporter asked Schuiten how he got involved in this project:

François Schuiten: “I need to find myself regularly in the shoes of a beginner. In fact I believe we all need new visions in the fields we’re passionate about. When I was contacted by NeoText’s founder, John Schoenfelder, who knew my work backwards, his approach for our project enthralled me immediately: not only did it include a completely unique creative collaboration between a writer — Adam Roberts — an artist and a publisher/producer from the outset around a concept well-suited for my art, but it would allow me to publish my art in e-book form for the first time in my career and also for a project of mine to be released exclusively in the US before Europe – a project aimed both at a wide readership and at the film/TV industry.

In other words, building these bridges like the beloved magazines I’d started out in, with a global, multi-faceted outlook!” 7)

In an earlier interview Schuiten explained: “NeoText has a completely innovative way of approaching the creative process,”. Schuiten told The Hollywood Reporter. “At a time when the graphic novel industry is walking in circles, NeoText is forging a new path, building bridges between prose, comics, and cinematic storytelling. When I began my career, it was a seismic moment for comics, with the publication of magazines like Heavy Metal. I’m reminded of that historic moment now, as NeoText looks ahead to the future.” 8)

A mysterious change has occurred in humanity. Nobody knows how, why or exactly when this change came about, but disparate, seemingly unconnected people have become afflicted with the uncontrollable desire to take objects and move them to other places, where the objects gather and begin to form increasingly alien, monolithic structures that appear to have vast technological implications. Some of the objects are innocuous everyday things—like a butter knife taken still greasy from a breakfast table or a dented cap popped off a bottle of beer. Others are far more complex—like the turbine of an experimental jet engine or the core of a mysterious weapon left over from the darkest days of WWII.

Where is the Compulsion coming from? And—possibly more importantly—when the machines they’re building finally turn on, what are they going to do? 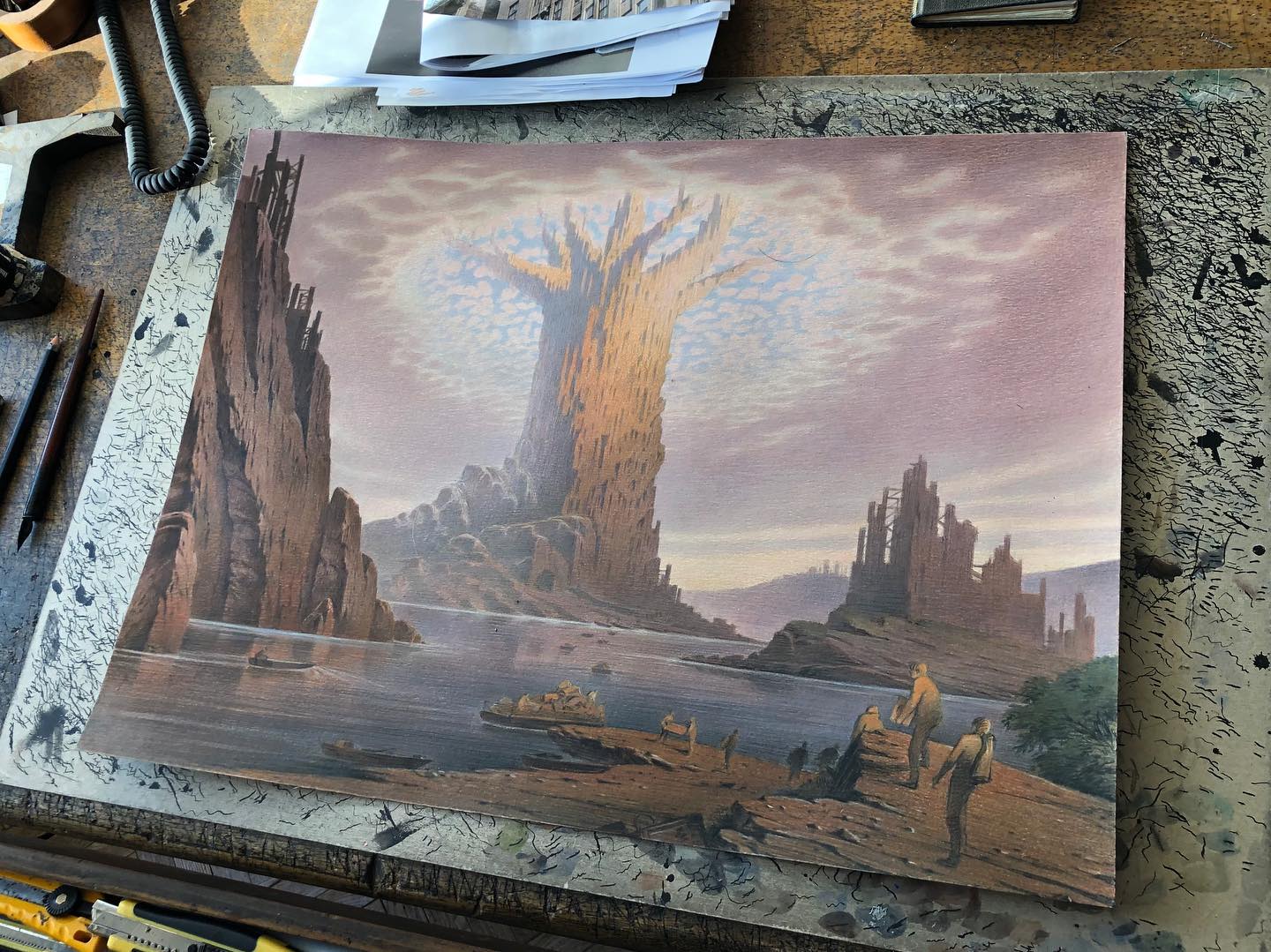 Haunting and evocative, The Compelled follows the stories of various different characters affected by Compulsion—an American congressman figuring out how to spin the news of his Compulsion, a woman Compelled to grab a cop’s gun and steal his car (and the cop who chases after her), a wealthy businessman funding the expensive retrieval of something for his Compelled lover—and just like the Compelled themselves, readers watch their seemingly disparate stories coalesce into something astounding. 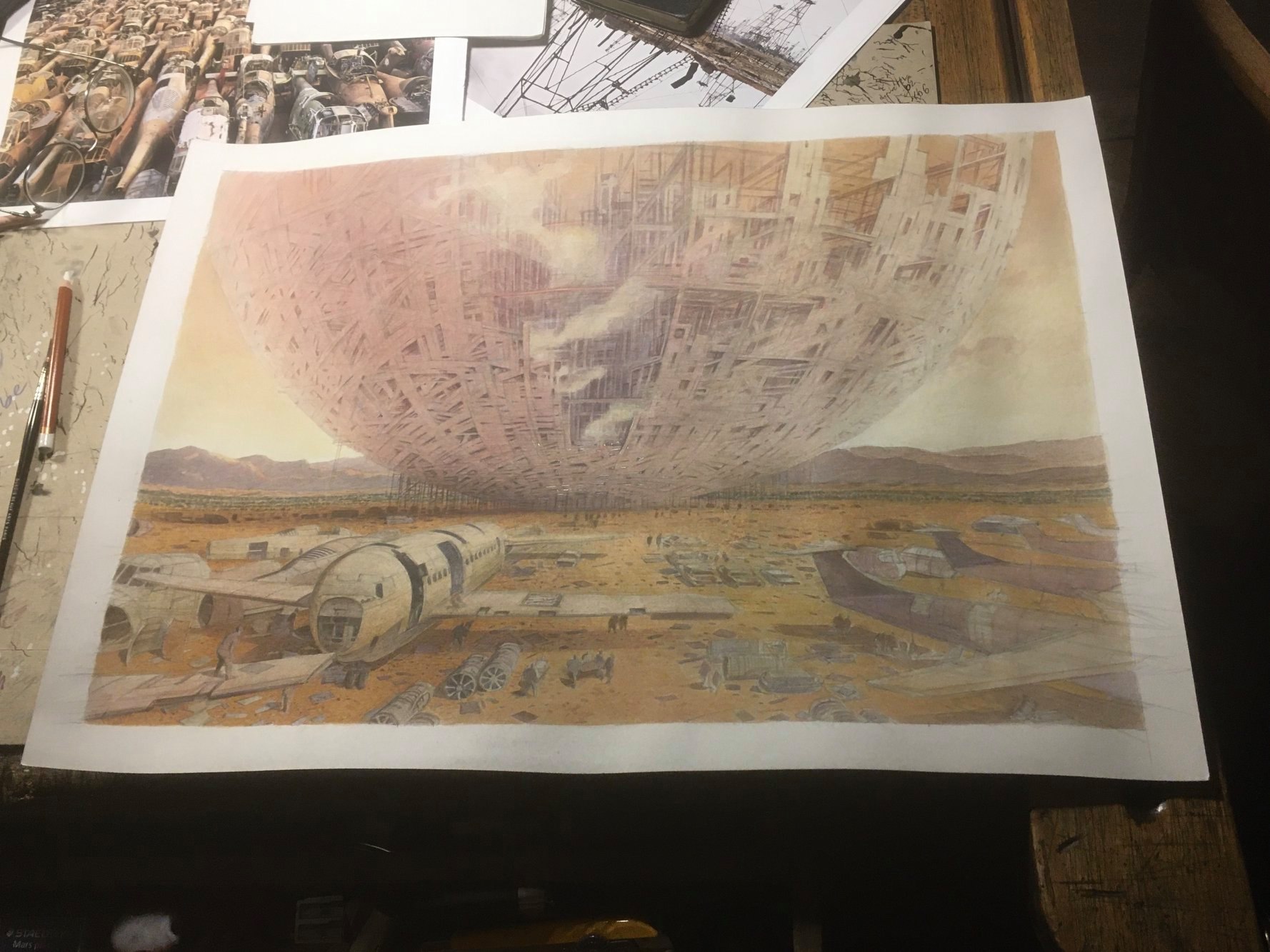 The artwork by François Schuiten used in the Compelled.