The Shadow Of A Man 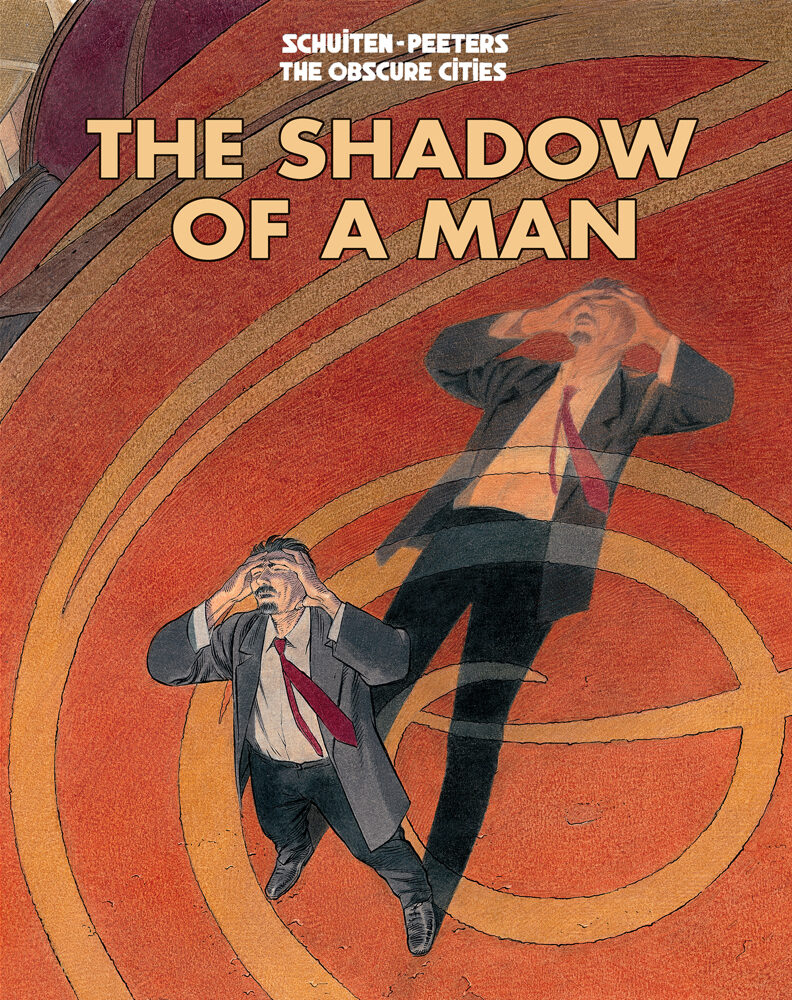 In 1983, Belgian artist François Schuiten and French writer Benoît Peeters published the album version of The Great Walls of Samaris, inaugurating Les Cités obscures, a media-spanning bande dessinée series exploring a counter-Earth populated by discrete city-states roughly analogous to real-world locations, inspired by and indebted to writers like Borges, Calvino, and Verne. Light steampunk by way of a Belle Époque in perpetual decline, Les Cités has always encouraged reader participation, fostering an enthusiastic international fanbase engaged in communal worldbuilding, and maintaining a comprehensive dictionary at Altaplana.be. Yet, despite its enduring popularity at home and abroad, Les Cités has had a spotty publication history in English. Beginning in 1987, NBM brought out four of the first five albums—The Great Walls of Samaris (1983); Fever in Urbicand (1985); The Tower (1987); and Brüsel (1992)—and then the two-volume The Invisible Frontier (2002, 2004) before stopping. These editions eventually went out of print and no further albums appeared in English until 2013, when Stephen Smith formed Alaxis Press and funded the translation and publication of The Leaning Girl (1996) through Kickstarter. This success led to Alaxis becoming an imprint of IDW in 2016; to date, they’ve published three more volumes (including a reissue of The Great Walls of Samaris with added material, titled simply Samaris), making The Shadow of a Man (1999, 2009) the eighth title from the overall series in English translation.

The Shadow of a Man is set in the former Brentano, now Blossfeltdstad, an unpopular name change with the inhabitants because tourists find it harder to pronounce. Albert Chamisso, the man of the album’s title, is a high-strung insurance agent wedded to protocol and detached from empathy, priding himself on his efficiency and propriety as a worker. He’s also recently married to Sarah, young, beautiful and—as his boss and coworkers are quick to remind Albert—eminently beddable. However, Albert is plagued nightly by dreams of disembodied hands that drag him from bed and hurl him from his balcony into the high-rise canyons below. Fed up with his inability to perform, Sarah sends Albert to Dr. Polydore Vincent who, after the requisite waiver, prescribes an experimental new drug. Albert enjoys a full night’s sleep and marital harmony seems restored. Then Sarah notices her husband’s shadow. No longer an absence of light, it’s taken on the hues and appearance of Albert himself, projecting his form onto every surface in a clear violation of social etiquette.

his unexpected side effect sets off a series of declines in Albert’s fortunes that culminate in him living alone, disheveled, and paranoid in an old quarter of the city slated for demolition. Here he meets his neighbor-across-the-way Minna, a young actor who moonlights in a burlesque cabaret while harboring aspirations toward higher art. She sees the potential in Albert and his condition, and together they design and stage “The History of the Hands”, a two-person acrobatic pantomime based on Albert’s dreams. It’s a hit due to the artistry of the shadow, which the audience thinks is a novel trick of projection and new technology. The couple’s fame grows until a certain encounter restores Albert’s shadow to everyday shades of black. They attempt to soldier on with an adapted production and then events conclude, after a fashion. 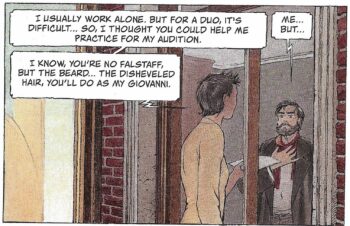 It all unfolds at a good clip, with a sense that the first half is rushing to Albert’s meeting with Minna in the second, recognizing that their dynamic is the story’s greatest strength. Prior to her appearance, every relationship of Albert's is marked by rejection and exploitation: Sarah leaves him; his employers terminate him while denying disability; he gains unwanted recognition when a photographer publishes his images for profit without consent. By contrast, Minna embraces Albert as a fellow artist with genuine open-mindedness and warmth rather than calculated curiosity. They uplift each other with growing devotion, and it’s a deft choice by Peeters to bookend Shadow with two bedroom scenes - Sarah and the nightmare to open, Minna and contentment at the end. Other strong moments come from little touches rounding out Albert’s character: his business of being too preoccupied with taking the precise dosage of medicine to notice Sarah’s obvious desire, or his furiously penning a self-righteous letter decrying the insurance company’s cruelty to its customers and condemning it for tossing him aside after years of loyal service. The strongest such moment is Albert’s one-page catharsis begging forgiveness from his shadow and admitting to living life without passion. It’s affecting and unexpectedly honest, and Shadow would’ve ultimately benefitted from leaning more into that journey from repression to emotion instead of spreading the focus elsewhere. 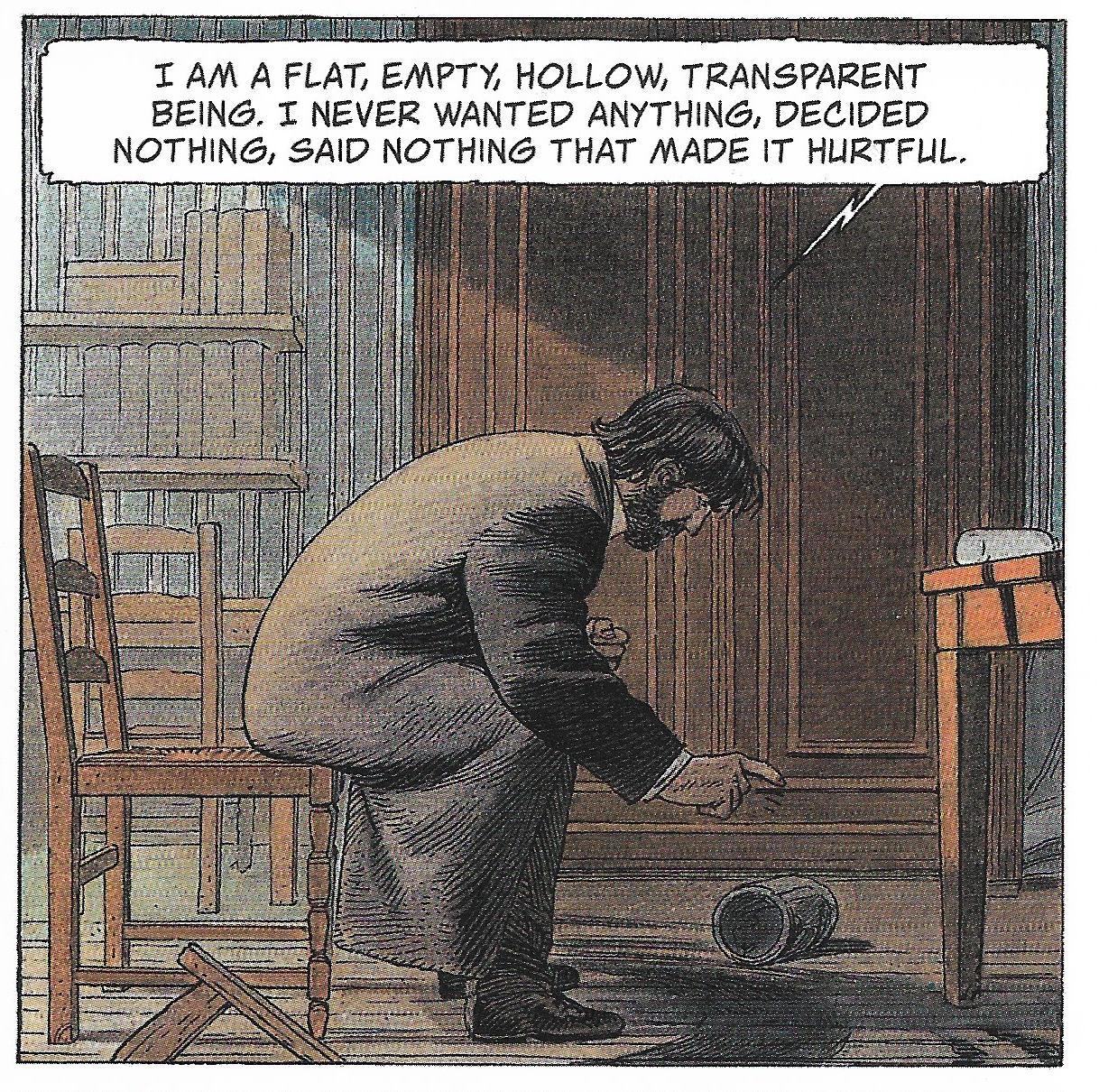 Beyond this, the book feels slight. Good Les Cités obscures stories either explore the psychological and physical impact of the environment people have chosen to build around themselves, or they offer glimpses of the larger setting of the world: a sense of the progression of time and history separate from what we see on the page. The best stories do both. The Shadow of a Man, with its limited scope, suffers in comparison to other volumes in the series. Albert’s personality and his dilemma have to be compelling enough to fill the smaller compass of the narrative; whether they are depends on your taste for a passing character study. Peeters and Schuiten were themselves aware of these shortcomings. This translation of Shadow utilizes a 2009 reissue, heavily revised from its original 1999 publication. In an afterword, Peeters cites Hergé as an example of the dangers of revision, but concludes the changes here were necessary to redeem an unsatisfactory story, with the caveat “It is not certain that these transformations have enabled us to resolve all the difficulties of The Shadow of a Man.” The transformations in question include excising five pages, inserting eight new ones, and adding first-person narration from Albert. Without the 1999 edition at hand, it’s impossible to have the fun (as Peeters puts it for curious readers) of comparing the two, but this brief, honest backstage look goes a way toward explaining why Shadow exists in the form it does. 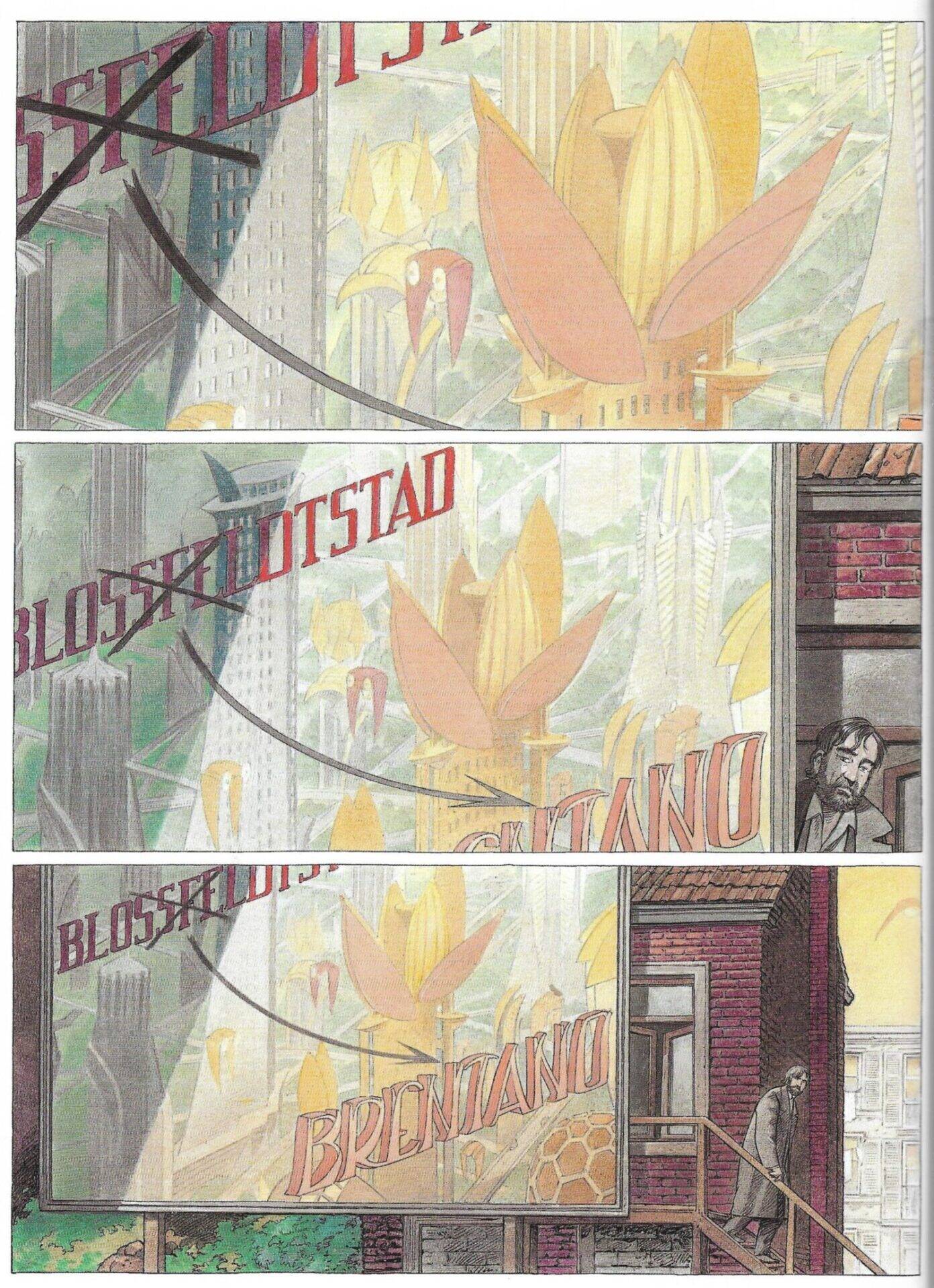 Deleted page from the 1999 edition included as bonus material.

Still, there’s enough here to enjoy. Shadow touches on themes common to the Les Cités oeuvre: the perceived superiority of synthetic over organic; unpopular urban renewal efforts; the pomposity and ultimate uselessness of self-styled medical experts. Readers in the know will spot references to previous works: the omnipresent Prof. Wappendorf makes an appearance, and when Albert first meets Minna she’s rehearsing for a stage version of The Tower, the third Les Cités album in our world but regarded as creation myth in theirs. Stephen Smith’s translation reads naturally, complemented by Neil Uyetake’s lettering. François Schuiten’s art is, as usual, gorgeous and clean, utilizing a technique of laying down color before inking the linework, creating a deep, rich look for people and architecture alike. In the end, any visit to Les Cités obscures is worth the trip and, while this might not be the best introduction to new readers, it’s still an entry point, and return visitors will appreciate Alaxis Press’s ongoing efforts to keep the passages open to the English-speaking world. Readers who are left wanting more can look forward to a new translation of The Tower scheduled for 2022 and, for those long-suffering among us scouring used copies and translation files, plans to start bringing the larger range of Les Cités material into English at last.

Original article by Bryan Zubalsky, published at October 26, 2021.
Read the original publication at The Comics Journal