« Read an excerpt of a new NeoText sci-fi novella 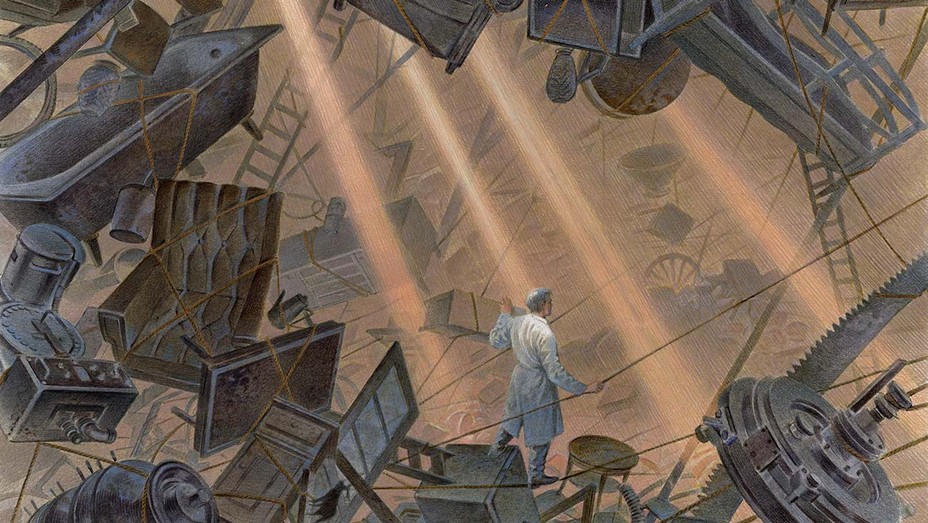 The artist of 'Les Cités Obscures' talks about his latest project, and what he's accomplished in his career to date.

François Schuiten is European comics royalty. Working in comics since 1973, he’s worked with iconic publishers such as Casterman and Les Humanoïds Associés, with his work appearing in titles including Métal Hurlant and Belgian newspaper Le Soir. His award-winning series of graphic novels, Le Cités Obscures, created with writer Benoît Peeters, ran for 25 years, with IDW Publishing launching an English language edition of reprints this year.

Schuiten isn’t one to rest on his laurels, however, and this week sees the release of his latest project, The Compelled. Adam Roberts’ sci-fi novella from new publisher NeoText is the story of the need suddenly felt throughout humanity to build gigantic objects from seemingly everyday material; it’s also the first full-length prose publication illustrated by Schuiten, as well as his first project to be released initially in the U.S.

The Hollywood Reporter discussed the project, and the unfulfilled ambitions that still keep him working so hard, with the 64-year-old artist via email.

Throughout your career, you’ve appeared in a number of iconic publications: Pilote and Metal Hurlant spring to mind immediately. Now you’re working with NeoText — what is it about them that interests you?

The magazines you mention – and we should also add A Suivre – revolutionized the Eurocomics landscape. Until then, in our part of the world, comics were destined to children. These brazen publications gave us the impression we were part of an extraordinary creative adventure – they were embracing an adult gaze for an adult readership. And they represented bridges between different artforms: music, cinema, literature, illustration… Everything seemed possible! I was born as an artist at that time.

That adventurous spirit is obviously missing from the current European comics culture. NeoText’s ambition has allowed me to experience anew this joyful opportunity of intense creativity – and is opening more doors for me. 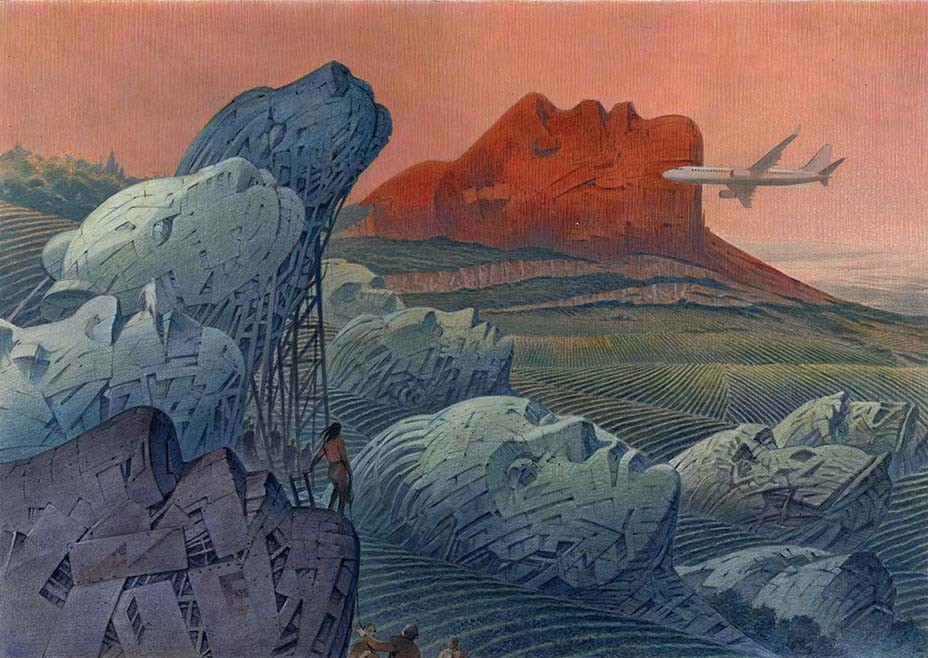 You’re known for your comics work, obviously, but your work encompasses multiple areas of design and illustration, from creating postage stamps to working in movies and even creating physical spaces for art exhibitions and train stations. Is there a line — or lines — between these different kinds of projects in your head, at least when it comes to visualizing them? Is there a conversation for you between comics and architecture, for example, and if so, are those liminal spaces comfortable for you as an artist?

From early on, I always wanted to explore other territories of visual storytelling. Very quickly, I turned to film, opera, scenography and full scale exhibits. It felt natural for me to transition from one medium to another, because my craft lies at the heart of every visual storytelling experience. Telling stories with images is my comfort zone. And these combined experiences enriched my work as a comic book artist tremendously.

I started out very young, and I sensed I would grow through other outlooks, through invigorating collaborations and even unlikely undertakings! This meant accepting failure as much as success, and entering fearlessly the infinite lab of the world. Lest one should run in circles…

Building off that somewhat: your work has always been particularly adept in conveying a sense of space and scale — perhaps unsurprisingly, considering the nature of projects like Les Cites Obscures, or The Gates of the Possible — and that’s something that feels a constant even through your work in The Compelled. There’s a thrilling physicality and sense of place in your art — in many cases, the location is the primary character for the viewer. Where does this come from? Is it intentional?

I don’t really know. Perhaps I have to recognize an unconscious influence linked to my background – I do come from a family of architects. But I’m also fascinated by the tension between the world as it is and space. And I need a certain scale to dream up my drawings. And every day, I’m motivated by this incredible privilege that I have to build entire worlds on a piece of a paper. 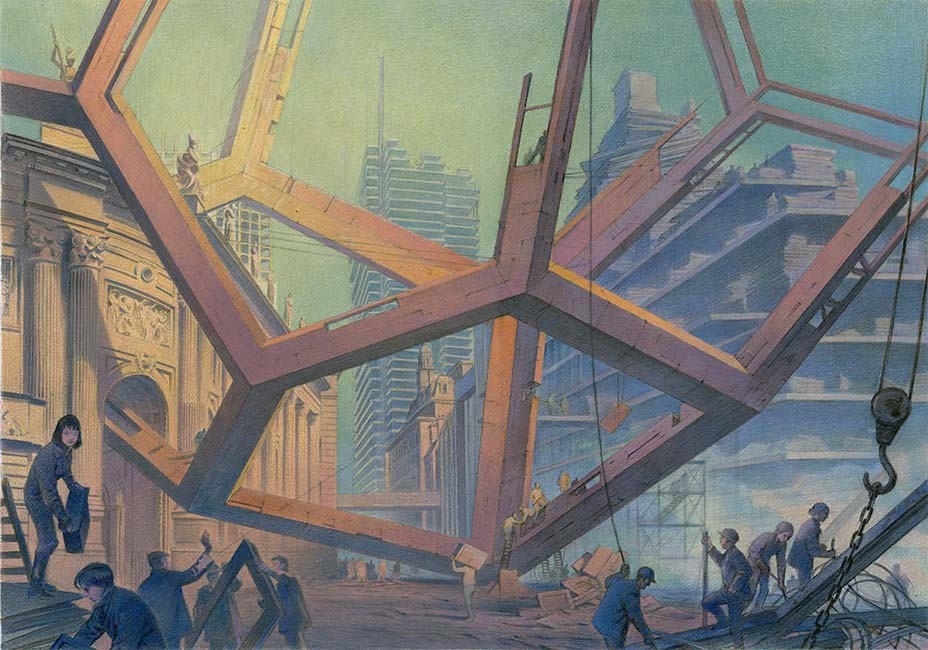 Your work has, across your career, won both admirers and critical acclaim, not to mention awards; you’ve won prizes at Angouleme, the U.S. Inkpot Awards, the Japan Art Festival and even been made a baron in your native Belgium. Are these things that motivate you to keep working? If not, what does keep you at your drawing table?

I am lucky, of course: the pleasure of sitting at my drawing table has been the same for the past fifty years or so. But every day is a battle, and it requires discipline, even more so with age. You have to fight against every bad habit or reflex accumulated over the time, and that’s never a sure thing.

Returning to The Compelled, and NeoText as a publisher overall; how did you become involved with both? For a man with such success and reputation as yourself, is it exciting to be working with a new publisher to establish a new audience again?

I need to find myself regularly in the shoes of a beginner. In fact I believe we all need new visions in the fields we’re passionate about. When I was contacted by NeoText’s founder, John Schoenfelder, who knew my work backwards, his approach for our project enthralled me immediately: not only did it include a completely unique creative collaboration between a writer — Adam Roberts — an artist and a publisher/producer from the outset around a concept well-suited for my art, but it would allow me to publish my art in e-book form for the first time in my career and also for a project of mine to be released exclusively in the US before Europe – a project aimed both at a wide readership and at the film/TV industry.

In other words, building these bridges like the beloved magazines I’d started out in, with a global, multi-faceted outlook! 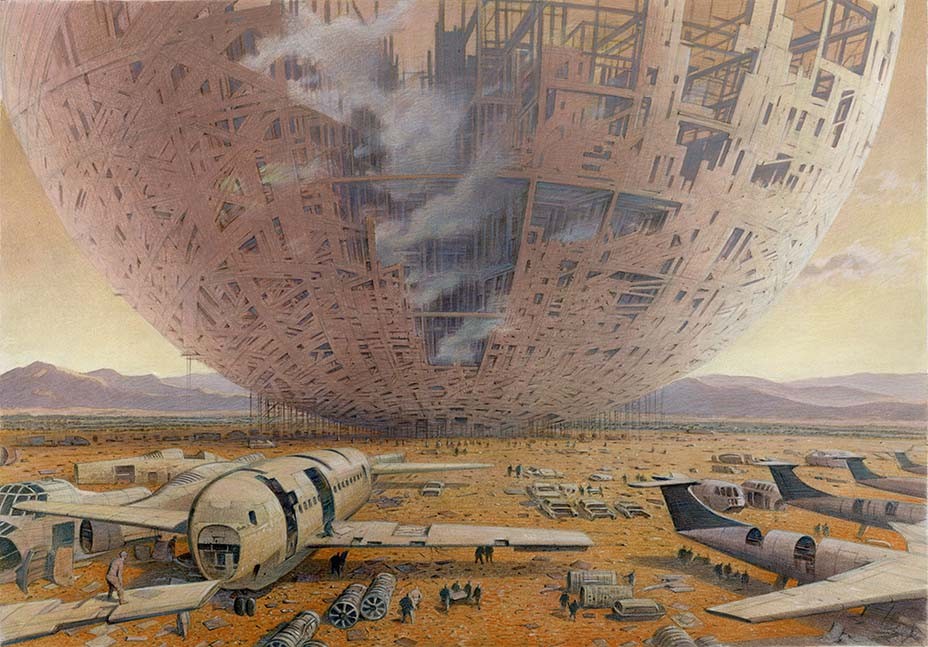 You still sound excited by the possibilities open to you, leading me to wonder — what are the unfulfilled ambitions for you, professionally? As I said above, you’ve had a very varied, and full, career to date. Is there, nonetheless, a significant landmark that you’re still headed towards, in your mind?

Right now, I’m working on an ambitious concept of live show performance – using cutting edge technology, I’d be drawing full scale backgrounds in real time, while dancers, musicians, and actors – some of them dear friends — will be engaging with the art. Fortunately, a world-renowned stage director is interested in this approach.

And of course film is a field I haven’t totally explored yet. I dream of an ambitious and demanding collaboration with great filmmakers. 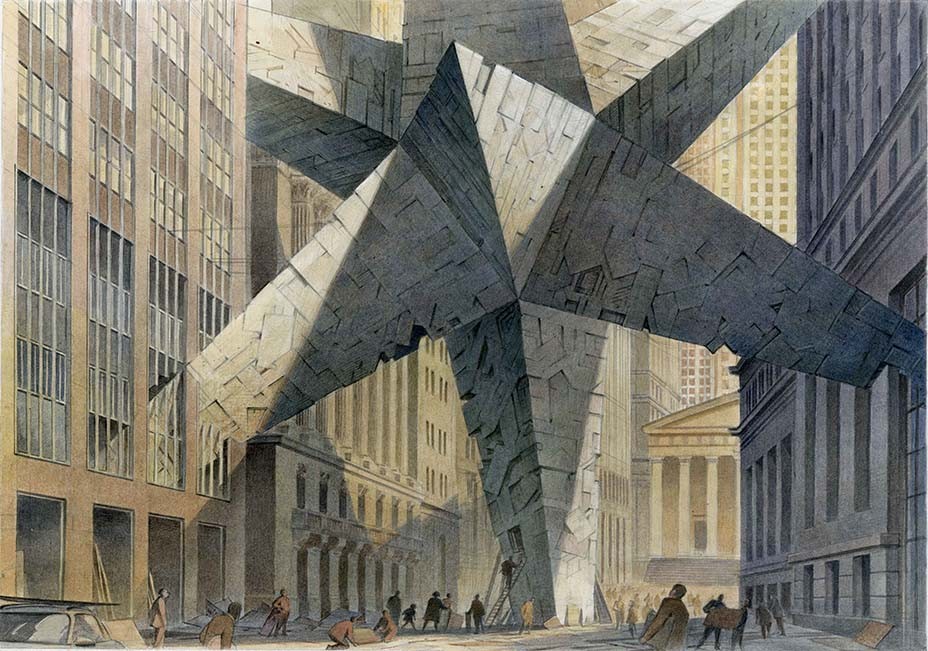 The Compelled is available digitally via Amazon and the NeoText website. Below, as a tease, the (very short) first chapter of the book, in its entirety…

People find themselves compelled to take certain objects, to lay hands on pieces of the world as it is, and to move them, dis- and re-assembling them.

The objects represent every form created by people across human history. A simple shoe. An empty soda bottle. Or it could be as complex as a piece of the rarest statue from antiquity. Or an item of cutting-edge technology stolen from a secret lab.

The objects are moved to new locations, altered into new shapes, and assembled into new structures that over time are growing monumental, and alien in shape.

The world as we know it is increasingly becoming a skeleton of its former self And a new 'body' of civilization is forming.

At first the structures the Compelled assemble are skeletal. An odd reflection of the corresponding skeletons of the buildings and places from where the objects were taken. They are not yet finished; they are confusing; they are misshapen. Some people fear them. Many find them mysterious in a forbidding way. Others grow angry and attempt to disrupt the process, tearing down what has been built.

Increasingly, everywhere one looks, familiar buildings are being reduced to their bare parts. Leaning in strange ways. Re-vealing the architectural and infrastructural arteries of a world we took for granted, a world that reveals itself as also strange and alien.

The Compelled carry, drive, lift, heft, unload, dis-assemble and re-assemble pieces from the world that was. They are building a new world. A pilgrimage is mounting, similar to when the pyramids were constructed in Egypt, the stones dragged from the banks of the Nile.

Original article by Graeme McMillan, published at August 25, 2020.
Read the original publication at The Hollywood Reporter