Schuiten and Peeters Working Together

This is a 12 minute video of a younger Francois Schuiten working alongside his writing collaborator, Benoit Peeters, on a page. It’s all in French, so it’s mostly lost on me (except when Schuiten grumbles that his page is “terrible”, which is universal), but getting to watch Schuiten do quick “doodles” with a brush pen is awe inspiring. It’s the exact opposite kind of work from what you just watched on Friday, but it’s also impressive.

In the second half of the video, we’re back to Schuiten doing the painstaking work with the colors and inks.

I try to picture a writer and artist in American comics working this way together and my mind explodes.

Disclaimer: this video comes from the late 1990s. DVDs were around but the world wasn’t shooting everything in high definition yet, and people were still resisting 16:9 tv screen formatting. Thank goodness we won that war. 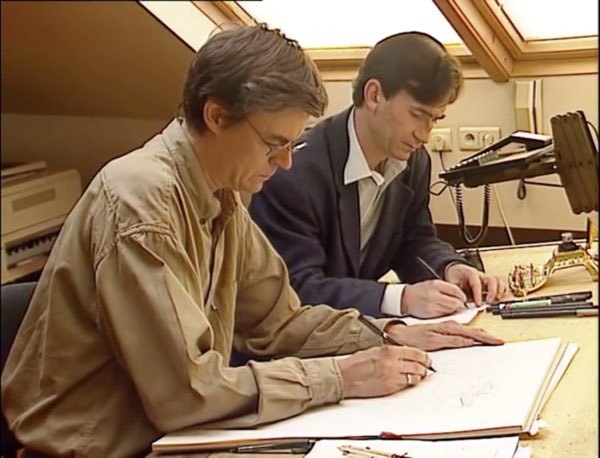 0:19 – Peeters sits shoulder to shoulder with Schuiten to work on a page. In this video, you see them work through a page, with Schuiten throwing away multiple full-size pages as he works through the layout issues. These “thumbnails” are not thumbnail-sized. 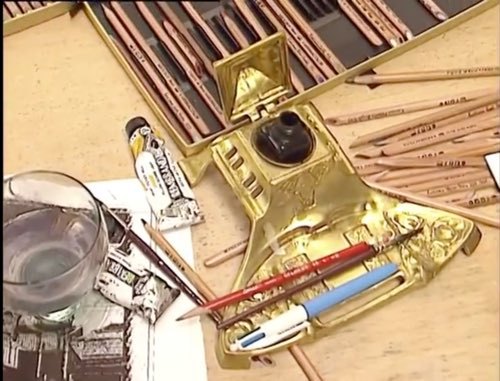 (Lost the time code, sorry) – Schuiten wasn’t using his heavyweight ink bottle holder yet. But he did have this lovely golden thing-a-ma-bobber. Looks like an Egyptian pyramid souvenir. I’m guessing that top would close over the ink jar to keep it from drying up. I also love the blue and white pen with four different inks inside. Those were a big hit at my school in the late 80s or so. And, yes, that’s a lot of pencils. But not ALL of them.

The Many Pencils of Francois Schuiten 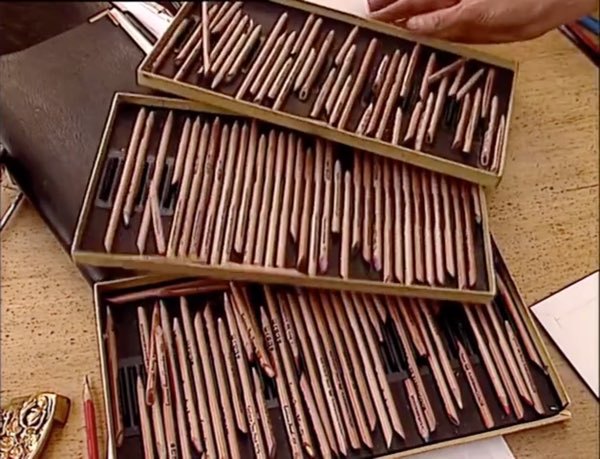 8:11 – See what I mean? I bet Schuiten never looks around the room for a pencil to draw with. He’s already more efficient than I am. 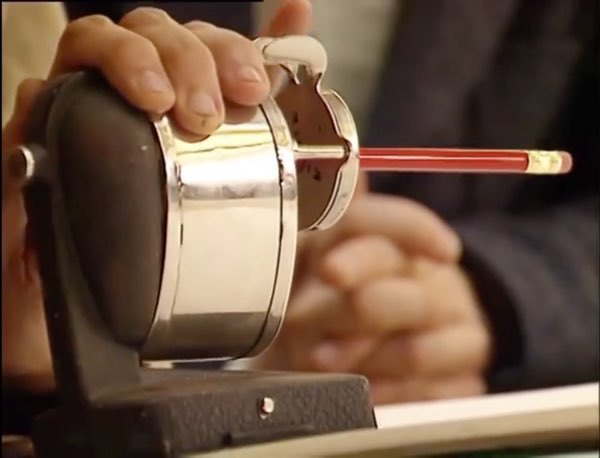 3:56 – He DID use a more traditional pencil sharpener, though!

What does he do with all those pencils? 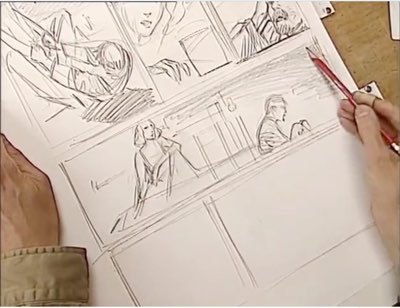 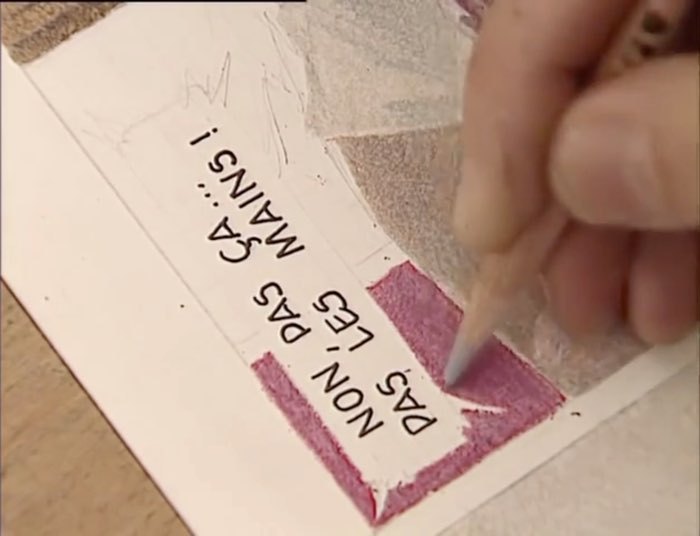 8:27 – He colors the comic in! Here’s Schuiten coloring around a word balloon. We’ll get to more of the lettering shortly…. 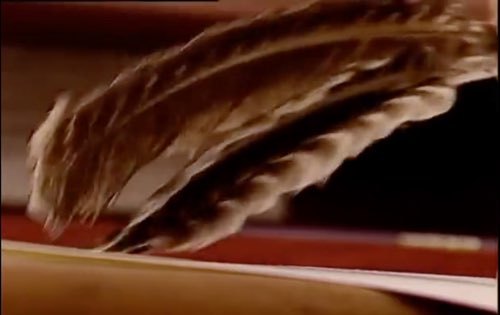 8:49 – He brushes off the pencil/eraser shavings with — feathers. That may be the most gentlemanly thing I’ve seen a cartoonist do since those pictures of comic strip artists in the 60s working in a suit and tie. 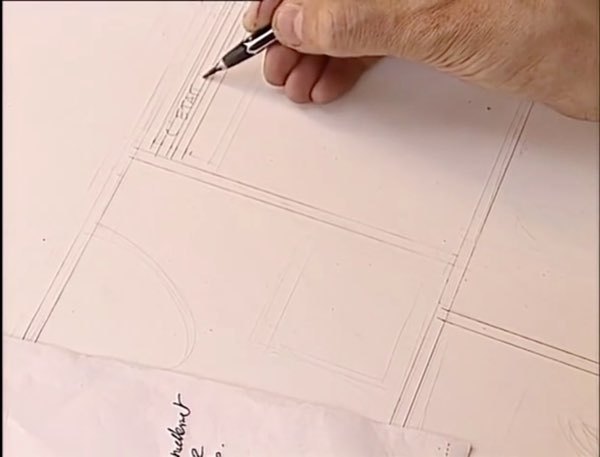 7:45 – Schuiten has drawn in the guidelines for his lettering. Sadly, there is no section in the video of him running an Ames Guide across a T-square. 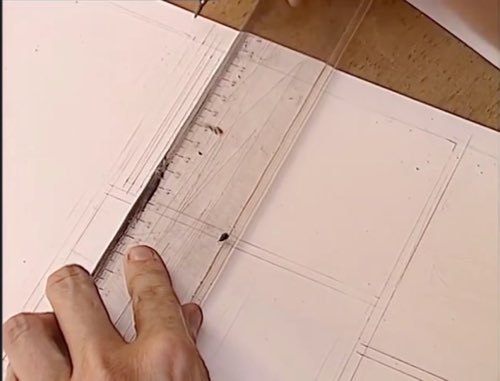 7:24 – Because he’s doing it by eye! It’s possible he’s doing this as a rough, and that the final version will use the exact precision an Ames Guide offers. Or, it’s possible that Francois Schuiten is the Chuck Norris of comics. At this point, it wouldn’t surprise me to find out that this tool isn’t even a T-Square. It’s just a ruler and Schuiten’s left hand has a built-in level. Maybe there’s a floating bubble built into his wrist to tell him when his lines are level? 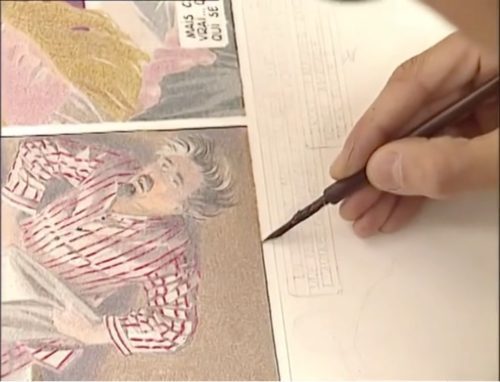 9:42 – Later in the video, as he’s inking borders in, you can see plenty more letters waiting to be inked in below those borders. Looks like he’s working on this page one tier at a time. 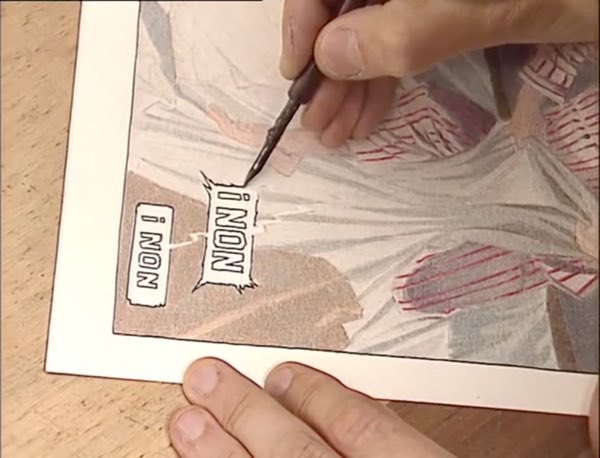 9:48 – There might not be video of him inking the sound effects, but there video of him inking in the balloons! It’s just a lot of careful work, lots of short lines, and a ton of experience to guide his hand. Word balloons in France and Belgium are not often oval like they are here in North America. They prefer the rectangles. (Have you read “Lake of Fire” yet? One of the tricks Nathan Fairbairn uses to make the book feel like an authentic Franco-Belgian comic is that shape on his balloons.) 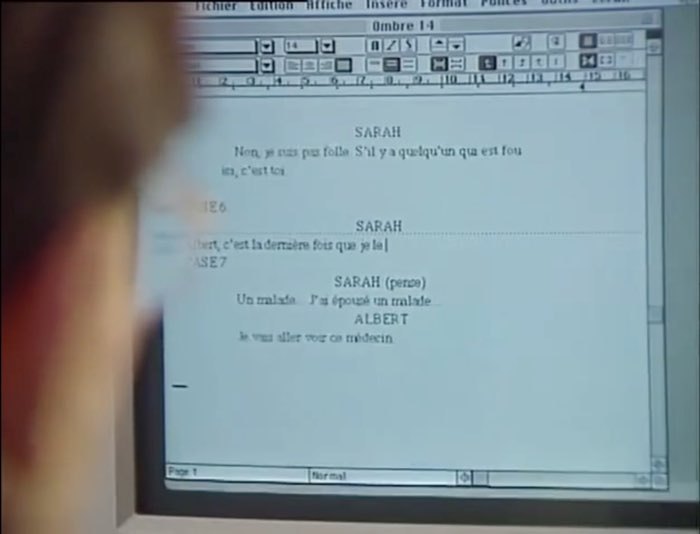 6:53 – The letters come from Benoit Peeters’ script, of course, and here’s a short clip of the writer at work. It’s short because watching a writer work is ten times less interesting than an artist.

I didn’t convert to a Mac until 2004, so this shot over Peeters’ shoulder is before my time. Which word processing program is he using here? 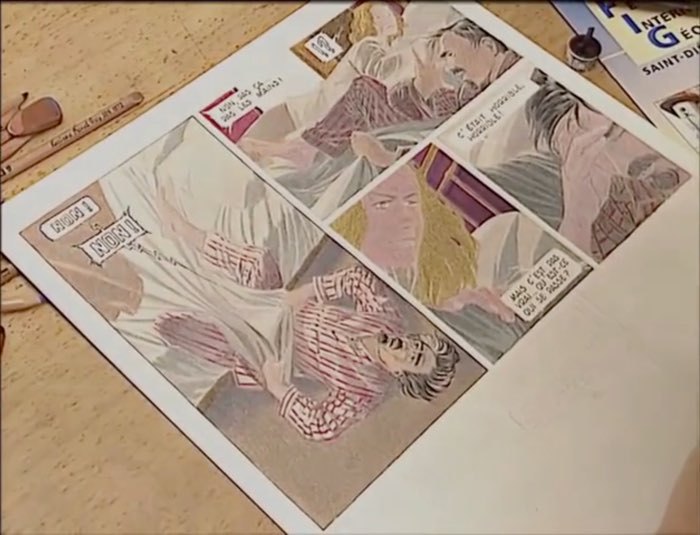 11:46 – I find this shot of his finished colored pencils absolutely fascinating. It’s like looking at a Photoshop document when you’ve hidden the art’s ink line layer and are left with just the colors. But there are inks on the page: 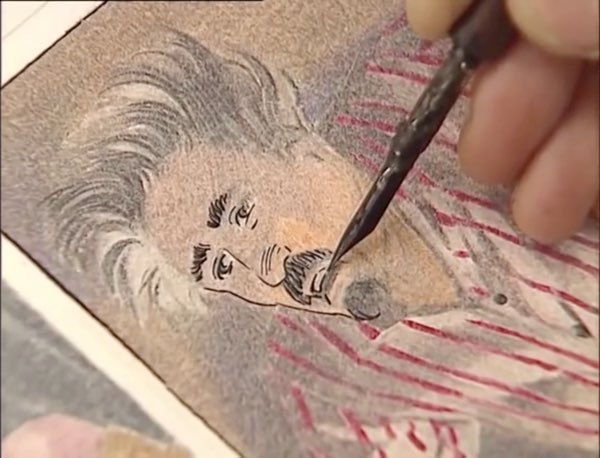 10:29 – Here he is inking over his pencils and his colored pencils and probably some paints of some kind mixed in there, as well.

On a Personal Note… 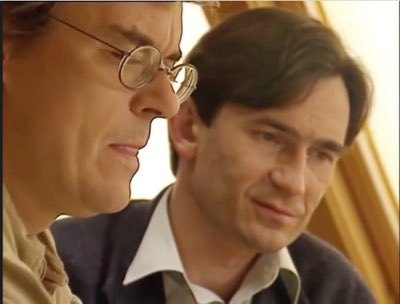 3:42 – My daughter has a tendency to stick her tongue out when she’s working hard. If she’s trying a new skill in her dance class or trying to dribble the ball down a soccer field, the tongue sticks out. As he’s penciling in some rough panel borders here, Schuiten is thinking so hard that his tongue is coming out, too. Somewhere, there’s a scientific paper that explains this and, in all likelihood, a vaguely Latin-sounding name for the condition. 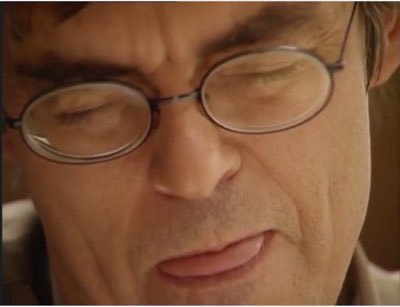