We speak to Hergé biographer Benoît Peeters about the growing acceptance of graphic novels as a serious literary genre, the rich history of francophone comics and his favourite Tintin books. 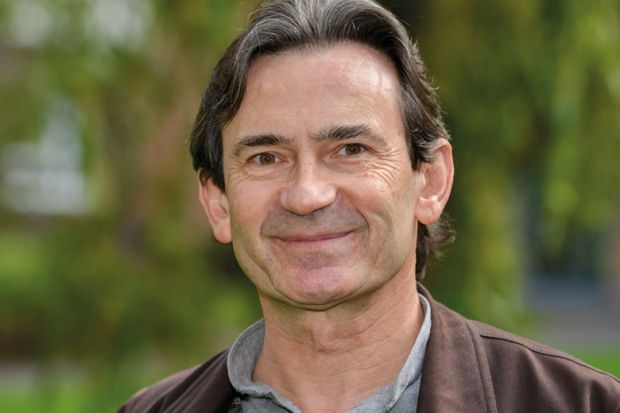 Benoît Peeters is a world-renowned authority on Tintin and the famous comic strip character's creator Hergé, about whom he wrote the biography Hergé, Son Of Tintin. Peeters himself is co-creator, alongside François Schuiten, of Les Cités Obscures, one of the most famous Belgian comic strips of the past 30 years. Last year he was appointed by Lancaster University as visiting professor of graphic fiction and comic art, thought to be the first such professorial post to be created in the UK.

Where and when were you born?

How has this shaped you?

In Belgium, during my childhood, comics were already very important. Tintin’s Adventures were among my favourite books. I still love them today. When I was 12, [Belgian comic book artist] François Schuiten was one of my classmates. He was drawing as much as I was writing. We became friends right away. A few months later, we created a small newspaper in our school. We published 15 graphic novels called The Obscure Cities (Les Cités Obscures) and we are still working together today.

This is the first appointment of its kind in the UK. What is the significance of this?

I was very honoured by this offer from Lancaster University. In the UK as well as in other countries, such an appointment would have been impossible 20 or even 10 years ago. Comics and graphic novels evolved tremendously during this period. They are taken more seriously today, artistically and academically speaking.

What do you hope to achieve in the role?

I want to promote comics in their diversity and perhaps inspire people to find the confidence to add their own take on it.

Graphic novels have become accepted in literary circles in recent years as “serious” works – do you think this should have always been the case?

There was certainly a turning point when the two volumes of Maus [the first graphic novel to win the Pulitzer Prize] were published by Art Spiegelman. It really allowed new perspectives. There were serious and important works before, but it is then that the graphic novel appeared as a genre.

Do graphic novelists still face prejudice from the books world for writing “comics”?

It is not the case today in France and probably not in the US either. I am under the impression that it is getting better in the UK as well. But in some countries like Germany, comics are still seen as childish or stupid.

Do you hope your time at Lancaster might inspire a new graphic novel?

I hope that discovering a lot of different comics will boost the creative process of my students.

Tintin and Astérix have not only transcended national boundaries from their native countries but have enduring popularity all the way up to today. To what do you credit their continued popularity?

What would you answer if the question was about Shakespeare or Henry James? In the same way, it is impossible to justify in a few lines the talent and the impact of major authors such as Hergé, Goscinny and Uderzo. Fortunately there will be a conference about Tintin and Astérix at the Lakes International Comics Festival on 14 October.

Why hasn’t [comic strip character] Lucky Luke had the same level of interest in Britain, or has it?

Lucky Luke is a very good and funny character but even in France and Belgium he was never as celebrated as Tintin and Astérix.

Will anyone dare to take up the pen and try to write a new Tintin adventure?

Hergé did not wish for anyone else to continue Tintin’s Adventures after his death. It is not a commercial work but a very personal creation. Many people dream of making a new Tintin book, but the result would probably be very disappointing.

We recently ran a feature about whether writer-academics read literary criticism about their fiction. Have you ever done so?

Yes, but I try to read it as if it was about someone else.

What advice would you give to your younger self?

What are the best and worst things about your job?

The best thing about it is freedom. The worst one is endless doubt.

What keeps you awake at night?

The fear of missing a good idea.

What do you do for fun?

That each day only lasts 24 hours. I have more projects than time to realise them.

What advice do you give to your students?

To find their own way, as freely as possible.

What kind of undergraduate were you?

I was probably not serious enough. But I read a lot – one book a day – and wrote two short novels during those years.

What’s your most memorable moment at university?

Meeting [French literary theorist] Roland Barthes and becoming one of his students. Under his direction I wrote my first work about comics. It was a close reading of The Castafiore Emerald, one of the last Tintin books. To me Barthes remains a major reference and a mentor.

What is the biggest misconception about your field of study?

That comics are meant to be funny and childish.

Have you ever had a eureka moment?

I would not speak about a major eureka moment. But for each project there is a moment where you suddenly see the final piece as a whole. As if it were already finished and you were the reader yourself. You are Hergé’s biographer and therefore will have as authoritative a voice on Tintin as anyone in the world. Which is the best book and why?

I would like to choose 18 out of the 24 Tintin albums. But two of them at least are real masterpieces: The Blue Lotus and Tintin in Tibet. The two stories where Chang appears.