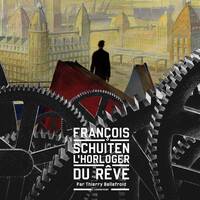 Known for the comic book series The Obscure Cities he co-hosts along with Benoît Peeters since the late 80 at Casterman, François Schuiten is more than a gifted designer. Born in the mid-50s, he was only sixteen years old when he published his first story. He began his first film collaboration when he was barely in Saint-Luc, where he studied comic arts. And soon he would also collaborate on more important stage sets, including Cités-Cinés Montréal and for many traveling exhibitions, live performances and pavilions of the Universal Exhibitions.

This book naturally begins with an exploration of the childhood and youth to understand the roots of a vocation. Then it crosses both the universe of the Obscure Cities and the cinematographic collaborations with Just Jaeckin, Jaco Van Dormael, Martin Villeneuve and others.

L'Horloger du rêve is scheduled to be released by Casterman on November 6, 2013.