« From digital to paper: trips & returns 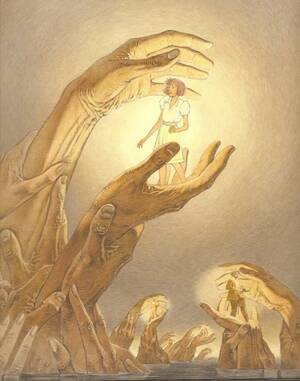 Some aspects of the Obscure Cities are still a mystery. Like the one about Mary von Rathen.

Mary von Rathen, daughter of Klaus von Rathen and Rosa Schliwinski was born in 736 AT. At the age of eleven, she mysteriously fell under the influence of another planet and her gravity axis took a new. After three years performing in the Robertson Circus under the stage name Laetitia 1), she took off in 751 AT with Wappendorf for the planet Antinea. They landed in the antechamber of the Spheres, where Mary met Augustin Desombres, with whom she fell in love 2).

Although Mary visited briefly our world, she returned to the Obscure World where she investigated the strange cases that happened in Brüsel as described in La Théorie du grain de sable 3).

Although back in the Obscure world she managed to keep in touch with François Schuiten and Benoît Peeters. Their correspondence is written down in a very rare book. They say even her testament has been found….

But how does this all relates to Mary von Rathen in our world? Several traces of Mary can be found on the internet. You can find a Mary von Rathen on Myspace, Facebook and even Twitter.

Just somebody who uses her name? Or are these real links to the obscure Mary von Rathen?