François Schuiten donated his original work to France and Belgium

François Schuiten, in consent with Benoît Peeters, has donated the majority of the original masterpieces to the National Library of France (Bibliothèque nationale de France) and the King Baudouin Foundation (Fondation Roi Baudouin). This news was confirmed by the spokesman of the Foundation. The designer has created a fund within the KBF to ensure the sustainability of his work and ensure public access 1).

Through this donation, François Schuiten solved any problems in future succession and ensures continuity of quality prints of his works beyond current technological developments.

“The problem, François Schuiten says, is that my children will pay inheritance tax calculated based on my rating. Yet, as I sold a few originals in my life, my work has reached an excessive value (between 4000 and 5000 euros per page). My children would then have no choice but to sell some boards to pay the inheritance tax, and thus spread the content of the albums. Without counting the risk of family explosion that this situation may cause” 2)

In an interview with RTBF François Schuiten explains his intentions. Listen to this interview in French: 3)

The King Baudouin Foundation accepts this gift with gratitude. She agrees to keep the François Schuiten Fund alive in collaboration with the Bibliotheca Wittockiana in Brussels to whom she entrusted the deposited works.

The foundation will receive the integrated set of originals of four albums of the Obscure Cities:

Also the pages and material used for the books François Schuiten made with Claude Renard and his brother Luc Schuiten will be part of this special fund of the King Baudouin Foundation.

The National Library of France will receive the following originals:

To celebrate this unique gift the National Library will have a seminar on the Obscure Cities series at April 11th, 2013.

The images made under external control and integrated later in the albums and any other drawings (scenography, posters & boards) remain the property of the family.

According to Le Soir 4) Schuiten and his relatives have confident in this approach. “In times when prices of originals reach exorbitant heights, this shows that not everything can be bought in the world of comics”. 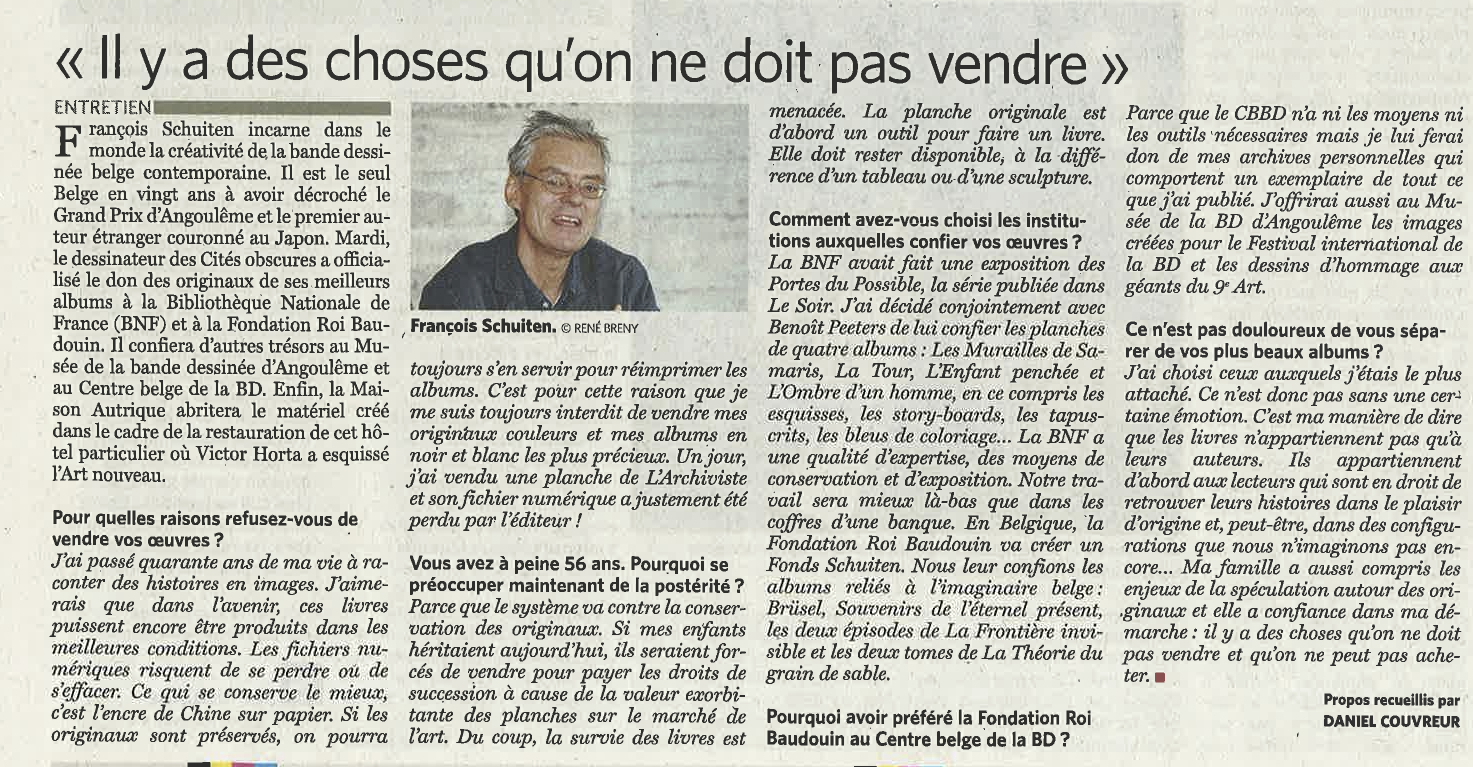 François Schuiten and Benoît Peeters have been thinking about this donation already for years. It took some time to make it work. The National Library of France and the King Baudouin Foundation were chosen for the links and experiences Schuiten and Peeters had with both before.

This decision gives the most guarantees that the books will be republished in the future. According to Schuiten: “the books don't belong to the authors. The readers are entitled to expect the best.”

In Le Monde he says “If no one read my albums in twenty or thirty years anymore, I do not care. But I do not want to print them wrong!” 5)