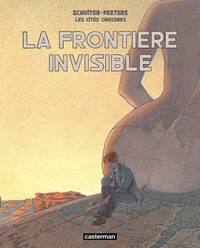 Casterman published a new edition of La Frontiere Invisible on April 25th, 2012. The album with 136 pages an integrated version of the two albums. This edition has no additional features compared to earlier editions, but it made in the same form as the other previous rereleased albums. La Théorie du grain de sable will be complete this rerelease series in 2013.